This Thursday, 1001Tracklists unveiled its very special annual revelation: ‘Top 101 Producers’. After much reading and data analysis, counting the plays and the number of times that each track was supported by DJs, it was finally possible to present the impressive count of 101 producers that excelled during last year.

Who won? This may not be a big surprise, as this producer has been playing high cards in the industry. Yes, the winner is Oliver Heldens! The Dutch producer wasn’t new on the list, but he’s made an incredible leap from number 24, the position he held in the 2019 ranking. This coronation is proof that, even in atypical times, it is worth taking creativity and dedication to another level and launch incredible music.

But, in such a big list, there are many interesting results beyond number one. This year’s list is very rich and diverse, with 21 countries represented including Australia, Brazil, Canada, Colombia, Croatia, Denmark, Finland, France, Germany, Hungary, Israel, Italy, Netherlands, Russia, Slovakia, Spain, Sweden, Switzerland, United Kingdom, Ukraine, and the USA.

Right after Oliver Heldens, and making a magnificent top 5, we find the Grammy-nominated trio MEDUZA in second place, the EDM kings Armin van Buuren and Tiësto in third and fourth and closing the top five is the winner of the last edition David Guetta.

MEDUZA stand out not only for achieving second place but also for achieving it directly. Apart from the trio, there are many new entries in this ranking to highlight as the British Martin Ikin, the Russian BIOR, the French Raven & Kreyn, the Dutch SWACQ, the American Party Favor, the Dutch Marc Benjamin and the British Solardo and Low Stepa and all this only in the top thirty positions. This reflects not only the wide range of music that DJs are using to make their sets and the diversity of music being listened worldwide but also the number of new artists that are coming into the picture. The range of genres represented has also opened up, with House, Tech House, and Progressive House being well represented.

Oliver Heldens will be crowned in a very special celebration: the first-ever Minecraft awards ceremony. The setting will be an incredible digital replica of the city of Amsterdam which promises to take us to the Netherlands. 1001Tracklist super live stream will happen this Friday, October 30 and will feature 10 hours of non-stop music from over 50 artists, many of them from the top of the table.

See who has risen with power or who has descended vertiginously in the ranking in 1001Traclists website and check out the full ‘Top 101 Producers 2020’ list below: 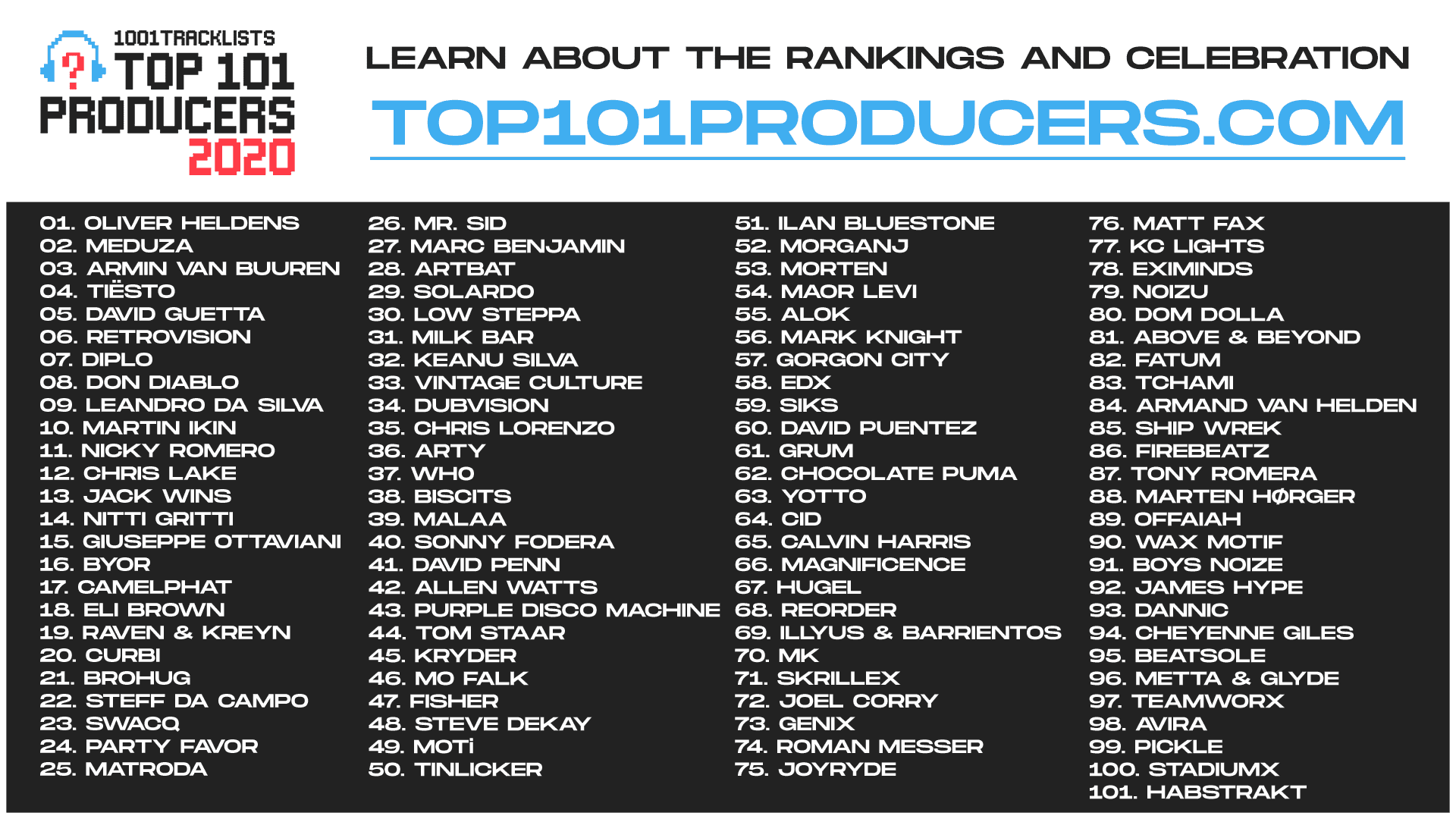