A petition protesting against an eviction notice served by Taylor McWilliams, the millionaire director of property investment firm Hondo Enterprises and member of the DJ collective Housekeeping, has received more than 8,000 signatures.

The Texan DJ, socialite and businessman has ordered the eviction of a family-run store Nour Cash & Carry, which sells inexpensive groceries and has been an integral shop for the local residential and trade community for more than 20 years.

The Save Nour Cash & Carry petition calls the shop a “vital resource to ethnic and immigrant communities”. It serves 90 per cent of restaurants in Brixton Market and the surrounding area, and attracts footfall to neighbouring businesses such as butchers, fishmongers and cafés.

During the pandemic, Nour has also been donating supplies to food banks and making deliveries to isolated customers.

Now Hondo Enterprises has served Nour Cash & Carry a section 25 notice, ordering the business to leave the premises by July 22 this year.

Hondo Enterprises purchased the freehold and leasehold of Brixton Market in March 2018 for £37.25 million, and promised at the time that “under our stewardship its unique character will be secured for the long term.”

McWilliams also drew protests and criticism in 2014 for constructing segregated entrances for poor and rich residents at the One Commercial Street block of flats developed by Hondo Enterprises in East London.

While public protests are impossible to host during the pandemic, the campaign to Save Nour Cash & Carry is targeting Housekeeping, the four-man DJ collective McWilliams co-founded in 2012. The campaign has published public records showing that Hondo Enterprises helps to fund Housekeeping.

UPDATE: @HOUSEKEEPINGLDN are sending this message to anyone who calls out DJ Taylor McWilliams. They say they are not ‘in any way involved in Hondo’ and ask to be left out of #savenour. But public records show that Housekeeping Events Ltd are partly funded by money from Hondo. Swipe to see the evidence. We are calling them out because it’s the only way to reach Taylor McWilliams, and he’s the one sole with the power to #savenour. McWilliams owns Hondo outright. The power to stop Nour’s eviction is in his hands #followthemoney #SaveNourCashAndCarry #brixtonmarket #stoptheevictions

On April 25 during a live stream hosted by Ibiza club Pacha, protesters targeted the Zoom call with signs on camera and messages of criticism in the chat. 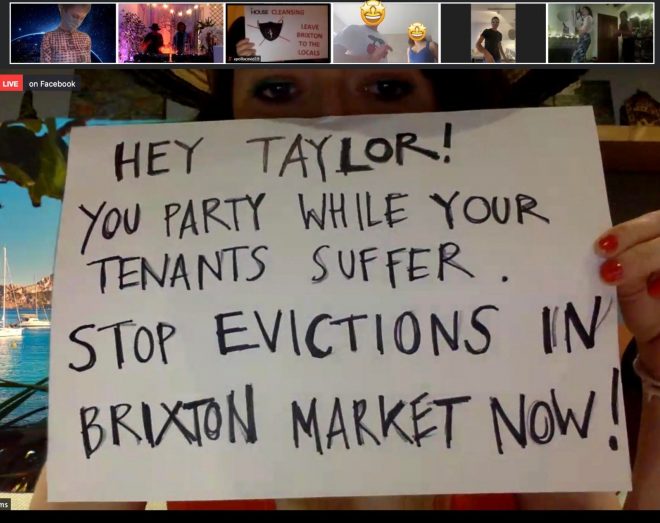 On May 1, Housekeeping announced a new EP on Twitter which drew more than 60 protest replies calling for McWilliams to stop the eviction of Nour. 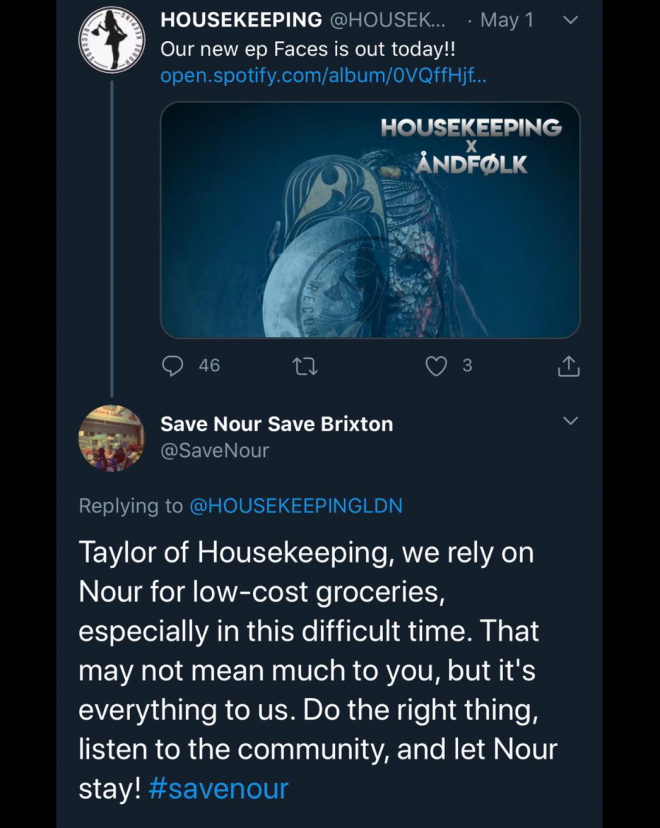 Housekeeping have since deleted all social media channels associated with the collective.

As well as calling for Nour’s eviction notice to be withdrawn and its lease to be renewed at an affordable rate, Save Nour, Save Brixton are also demanding no rent hikes are enforced on all Brixton Market vendors until the end of 2021 to allow them to cope with the economic stress of COVID-19.

Support for the campaign has come from across the music industry, including South London’s Gaika who said: “McWilliams benefits from the musical legacy of low income and minority ethnic communities. He is at the front end of a hedge fund-backed plan to reshape Brixton, clearly seeking to socially cleanse the area for quick profit.

“The eviction notices he has served are a betrayal of the values he publicly claims to espouse - though they are perfectly in line with the surface level cultural engagement he exhibits as an artist. He does so on the assumption that those people are voiceless, powerless and indispensable. I need him to know that other artists will resist his intrusion into both their cultural and physical space.”

The campaign can be contacted savenoursavebrixton@gmail.com.

“This is a community shop, respect the community.”

Brixton Market has been home to Nour Cash & Carry for 20+ years. We rely on it for affordable groceries, now more than ever.