A study conducted by Harvard University researchers Matthew Sachs and Robin Murphy as part of Barclaycard's Summer of Goosebumps investigation has offered further insight as to why revelers often experience goosebumps at music festivals.

Through his research and experimentation, Matthew Sachs developed an equation that translates this sensation into a mathematical form that can predict the chance of experiencing goosebumps during a live performance. See the equation below. 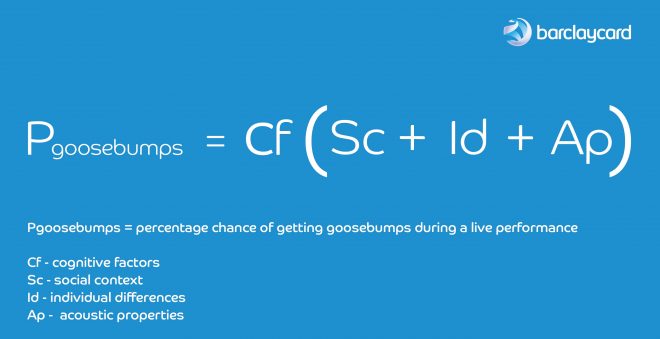 "Many studies have attempted to investigate what causes the emotion we feel while listening to music, but these have typically taken place in a lab setting," says Sachs in an interview with The Independent. "We’ve never before been able to explore how multiple factors influence the likelihood of experiencing goosebumps in a real-world context."

Testing 100 subjects at Reading and Leeds festival this past August, Sachs and Murphy found that 55 per cent of those participating in the study experienced goosebumps while watching a 45-minute live music performance. On top of monitoring every individual's physiological response, the researchers also asked participants about their outlook on life as well as their own mental and physical perceptions of health before comparing results.

The results find that those who experience goosebumps during a festival performance are more creative, generous, positive and in better physical health than those who don’t. Amongst the sample size, 88 per cent who encountered the sensation described themselves as being "empathetic" and "agreeable" individuals compared to 63 per cent who did not. Furthermore, 66 per cent of those who got the tingles were confident that they were in good emotional and physical health while the experiment was conducted. 46 per cent who did not experience the feeling said the same.

"The results of the Barclaycard study are the first to show a correlation between different personality traits and people who experience goosebumps," Professor Robin Murphy explains. "The evidence suggests that being truly connected with live entertainment and getting goosebumps has an impact on our overall sense of well-being and mood."

The experiment also showed that more women (55 per cent) found a stronger emotional connection with the music than men (46 per cent). On average, people who experience goosebumps during live music performances will encounter the sensation six times a month.

When looking at what genres of music are most expected to cause goosebumps, previous research found that rock music is the most expectant at 31 per cent, followed by pop (29 per cent), indie (7 per cent), house (6 per cent) and classical (5 per cent).

Other research conducted on the UK festival scene this summer has revealed Britain's dirtiest festivals, that two-thirds of women are concerned about sexual harassment at UK festivals and that music is the number one passion for young people in the UK.