A social distancing club night has been held in Germany 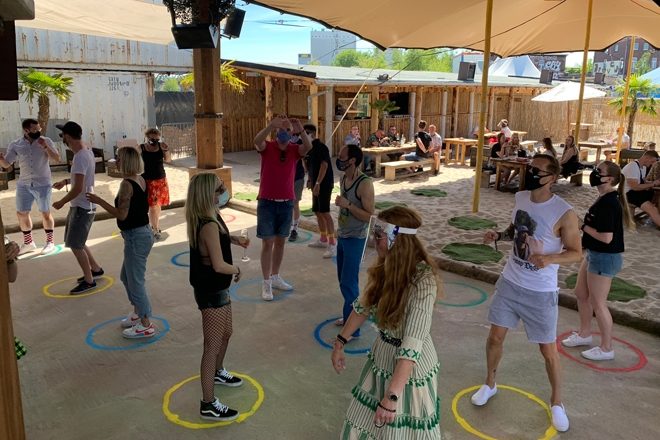 A social distancing club night has been held in Germany.

The promoters of TakaTuka at Coconut Beach club in Münster were able to host a party with Gerd Janson, Steve Stix, Kai Lorenzen and Thorsten Karger by cutting the venue's 2000 capacity down to 100 and drawing circles that were 1.5m apart on the dancefloor for individuals to dance within.

Other safety measures at the outdoor club included only opening half the venue, giving groups of up to 4 people maximum their own areas to congregate and drink in, social distancing markers at the bar and a plexiglass barrier around the DJ booth.

All attendees were required to wear face masks which they were only allowed to remove when at their allocated table and the bars were also fitted with plexiglass shields to protect staff. Sanitiser was also freely available.

Read this next: The world's first drive-in raves are being held in Germany

Tickets for the event cost €70 and included drinks vouchers and something to eat from the venue's in-house grill.

Talking to Mixmag, DJ Steve Stix said that Coconut Beach had to comply with strict guidelines set by the local authority in order to run the event.

On playing what might be the world's first official social distancing party, he said: "It felt good to play for a live crowd again. My first thought was 'do I play for a yoga session?' because there were circles and dots on the ground for everyone to keep their distance. At least it felt real with closed eyes like back in the days."

Stix said that ticket prices had been raised from the club's usual door price of €10/15 to €70 in order to cover the cost of opening the venue at reduced capacity. "As soon as the regulations of live events will be raised up to 250 people, there will be a lower ticket price," he said.

Speaking to Resident Advisor, Gerd Janson said: "Whatever your take on all of this is, part of it is how to deal with it, and how to make things possible again that were taken as a given. Taking all this into account, it went really well: a bittersweet mixture of nostalgia and hope. I had fun and I hope the dancers, too. It felt like a reinsurance that it can go on in some way, shape or form until things can get back to normal."

RA also reports that Gerd Janson reduced his fee by 80 per cent and that the club told German press that it would not be making a profit from the event, choosing to hold it by covering costs and in order to "send a sign of life" to the dance music community.