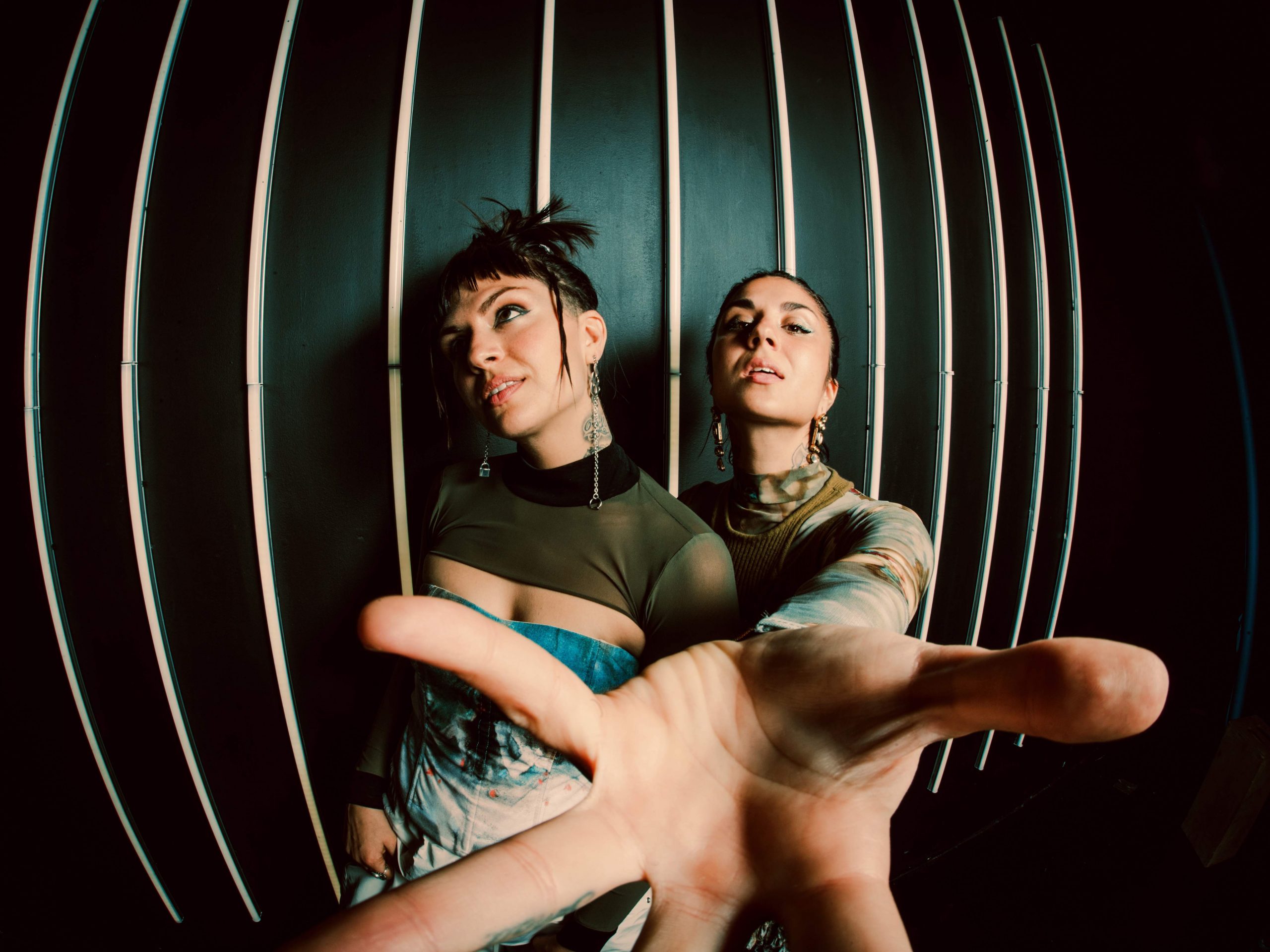 There were numerous ways this article could have begun, but as I ventured through the countless options of the best path to take, I stumbled upon a quote from French composer Claude Debussy that felt criminal not to include at the beginning. “Works of art make rules; rules do not make works of art.” There might be no better phrase that describes the undeniable impact that Jahan and Yasmine Yousaf, aka Krewella, have had on the world of music for over the past decade.

As they first made their way through the underground electronic dance scene of Soundcloud to breaking through with their ‘Play Hard’ EP and first album ‘Get Wet’ to ultimately redefining themselves as artists with the release of their second album, ‘Zero.’ The two sisters from Chicago continue to refuse to let the walls of comfortability and ordinary confine them. Like art, they make their own rules.

That notion fits better now than it ever has before as Krewella welcomes the release of their third studio album, ‘The Body Never Lies.’ A project in which both sisters say pulls from a piece of each phase in their career to ultimately form ten amazingly crafted tracks. ‘The Body Never Lies’ is more than just another compilation of songs. It is a Picassoesque work of art that beautifully paints the ever-evolving journey of what it means for one to search within themselves.

First originating from an excerpt in Jahan’s journal and featured as a lyric in two of the songs, the album title is a reflection of us as humans “feeling, remembering, and existing in our individual vessels that encase our soul and memories.” The album and its meaning not only motivates the listener to explore a depth to themselves they might never knew existed, but it reminds us just how powerful the soul, body and mind can be.

“The clench of a fist, the pit in your stomach, the fluid in your veins; the body is a sensor, messenger, keeper of stories, a fortress of the soul, an instrument of knowing, a rocket ship to other worlds. Every cell, pore, and bone recalls the past, absorbs the present, and senses the future.” – Krewella, Press Release

After the release of ‘Zero’, the world ultimately went into lockdown six weeks later, causing not just the cancellation of many festival appearances but the entire ‘Zero’ album tour for Krewella to be scratched.

During this time, both sisters said they took the opportunity to slow down and recollect themselves with other hobbies such as cooking, Twitch streaming and even building a home studio.

It wasn’t until around eight months later that Jahan and Yasmine reentered the realm of music creation, ready to dive back into the writing process. Thus, it was then that the overall bulk of ‘The Body Never Lies’ started to take shape. And while it might seem that the lockdown could have hindered Krewella creatively, it did the opposite.

“There was almost like a preparation section of the pandemic, and then once that passed, I think we were both just like thirsting to write so badly… and I think at a certain point we were both going so deeply inward because this time literally forced us to. We had no choice but to just think about our life experiences and everything that we have felt and seen and experienced over the last decade-plus of our career. Which included relationships, friendships, fallouts, anger, trust issues and joy and all this stuff to happen. I think [being forced to take a break] did us a solid in a weird way because we were able to explain ourselves and pick our feelings apart in a way we probably wouldn’t have been able to if we hadn’t had the time to fully just stop and think for so long.” – Yasmine Yousaf, Krewella, We Rave You

However, possibly more so now than ever, the creation of ‘The Body Never Lies’ and what it stands for really shows what makes Krewella special, and that is the one-of-a-kind sisterly-bond Jahan and Yasmine have with each other. As resembled by the Yin-Yang tattoos on their necks, the sisters, are each other’s perfect complementary force. Finding ways to balance the intense workload of what comes with being an international music artist but also dedicating the time towards focusing on their mental health, Jahan and Yasmine have leaned on each other to navigate the convoluted waters of the music industry.

“Our fears [when creating the album] complimented each other. I fear that we’ll fall back into the old hustle that we used to be in, where we kind of lost sight of why we even create in the first place. The joy is sucked out, and you’re just overrun by the nonstop touring, the studio, your schedule being completely booked up. Where you get a moment of fresh air, and you’re like, ‘why am I doing all this?’ That impacts your health and your relationships. I was in that mindset that I [didn’t] want to revert back to that, but I think where we are heading as human beings is like figuring out the balance of like how do you be boss women while also taking care of your health and be mindful of your bandwidth.” – Jahan Yousaf, Krewella, We Rave You

When it comes to songwriting and overall production, Krewella sits at the very top of the food chain. With ten songs, including the three featured singles, “Never Been Hurt” with BEAUZ, “No Control” with MADGRRL, and “I’m Just A Monster Underneath, My Darling,” the album is some of the best work the two Yousaf sisters have ever released.

You could argue that possibly one of the duo’s best traits is their ability to create a vast number of genres, and that is the exact thing that shines so brightly in this project. With expressions of drum and bass, hardstyle, deep-house and many other styles, Krewella has unlocked the door that so many producers hope to walk through one day, and that is the mental freedom to create whatever feels right at the time. They have shown to the world that dance music is more than just a few synths and a kick with some sidechain, but truly a reflection of the creator’s mind.

The song that shows this off almost better than any other is, in fact, “I’m Just A Monster Underneath My Darling.” As you listen to the drop in the song, you begin to ask yourself, how did they create that top melody? Well, it is born from something unavailable for purchase and download on the internet. It is actually the “Frankensteining,” as Krewella likes to call it, of Jahan’s voice that you hear. This trick is just one example of the genius-level creativity you will find in this album, but there are so many others.

With ‘TBNL,’ Krewella has also blessed fans with tracks that have been on the shelf for years. One song, in particular, many have been demanding that now sees the light of day is “Drive Away.” First teased in a stream back in May of 2020, ever since that listen fans have been salivating to hear the finished product. Now that it is out, it is easy to say the wait was well worth it, as this song has the potential to rise to the very top of the already Hall of Fame-worthy Krewella discography with the amount of emotion it creates for the listener.

After going through the album, the brilliance of Krewella can not be ignored. The duo allows each song to tell its own individual story while still never losing sight of what the theme of the project is meant to be. In a way, it feels like the release of ‘Zero’ resembled the Yousaf sisters rediscovering themselves. And now, with ‘The Body Never Lies,’ they are breaking down the doors saying, this is who we are, and are looking to dive deeper into what it means to be empowering female figures.

“For me [‘The Body Never Lies’] feels more entrenched in the intensity, the emotions, and the energy. So to me, it feels like an amplified version of ‘Zero’ with a little more walls removed from us on an emotional level too.” – Jahan Yousaf, Krewella, We Rave You

This album is another masterpiece by the LA-based artists that many will talk about for years to come. Its creativity, lyric writing, production and versatility is a breath of fresh air within music. But above all, it is an empowering and thought-provoking work of art. It not only proves that Krewella is currently one of the best musical duos in the industry today, but they are also one of the greatest of the entire generation. And what is even more impressive is that Jahan and Yasmine have continued to find ways to push the boundaries and break the rules of what is expected while still staying true to who they are as people and their beliefs. And while The Body Never Lies, the music doesn’t either. Krewella is unstoppable.

Check out the full interview with Krewella exclusively on We Rave You’s Youtube! Stream ‘The Body Never Lies’ here and purchase ticket to the tour here.