David Guetta and MORTEN are throwing a 'New Rave' [Q&A] 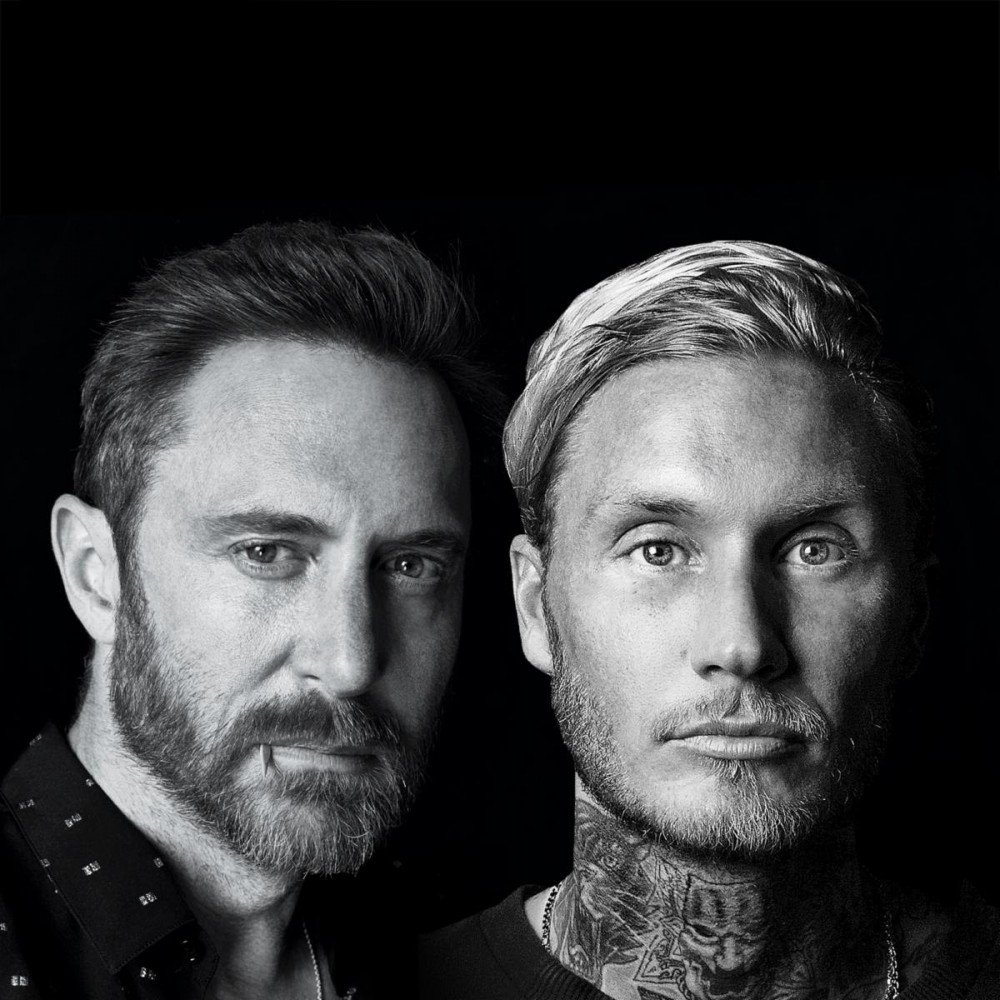 The sound that spans New Rave, dubbed “future rave” by both David Guetta and MORTEN, is born out of the producers’ shared frustration with a dichotomy in dance music: the choice between underground sound well-suited to a club but not up to festival speed, and dance floor-filling, high-energy EDM that, in sounding the same for the past four years or so, was no longer “satisfying,” according to Guetta. Guetta and MORTEN weren’t trying to change the electronic paradigm—they just set out to craft the sound that they felt was missing from the dance scene, to make the music that they not only wanted to hear, but also to play.

These aims, coupled with the kinetic nature of Guetta and MORTEN’s collaboration, have culminated in New Rave. Defined by its flirtations with dark techno, emotive evocations, and its sweeping range, which confers a certain firepower to the EP, New Rave is the climax to the producer’s creative partnership that comes just over one-year of their momentous activity together.

Dancing Astronaut caught up with David Guetta and MORTEN to look back on the early beginnings of the sound that has progressively electrified electronic circles since it caught fire: “future rave.”

Your listeners have been clamoring for the full-fledged release of “Kill Me Slowly,” premiered during the #UNITEDATHOME live stream and included on the New Rave track list. Did you expect the fan response to this song to be so strong, and why do you think fans have embraced this song so ardently?

MORTEN: David is used to getting this kind of attention around his music, [but] getting this kind of response is new to me, so it’s been very overwhelming, but I’m super happy to see how the fans are reacting. I feel like the hype around the music has been growing very organically. It’s something the fans have taken themselves and made it into their own movement, “future rave.”

GUETTA: It’s true and I think what’s interesting is that we started to do this a year ago. I didn’t want to use like the big machine to make [this] pop, I wanted [this music] to be genuine and organic and it’s really the DJs turned a few records that we did at the beginning [of this project] into a movement, and now, future rave is very much alive.

Not only are many, many DJs in the world playing our records, but also very big names are now making music in the same style that we started [with this project], and we like this, we’re flattered. It’s really unbelievable to see so much of a response [from both listeners and other DJs] and it makes me so happy.

David, New Rave marks a sonic shift for you, as you foray into a different style of sound. How did your creative process differ on the production of this EP compared with prior releases?

GUETTA: This is the first time that I’ve made an EP, I’ve always made albums and, what’s incredible with this is that it’s taking me back to when I started to make music. I was not trying to make hits, I was just trying to make music that I could play, and this was how we started this. We were both a little frustrated because we were stuck in this choice between playing underground music that was cool, but did not have the level of energy that EDM used to give us, or playing EDM, but then it would sound like four years old and it would deliver the energy, but wouldn’t have the excitement of some of the new sonics. We created something that was the answer to our frustration.

We made the music that we wanted to play. We just made a few records at the beginning, but when we saw that this was becoming a movement, we were agitated because of [COVID-19]. We can’t make it big the way we want to make it big because DJs are not going to be able to play the records at festivals, but at the same time, we also feel so creative in the moment that we want to put the music out there. And it’s actually probably time [to do so] for fans too, because everybody’s feeling so down. Why not try to cheer up people with our music? That’s what made the beat.

MORTEN: We worked a lot. We took a few months in Ibiza and had a lot of sessions down there. We wrote a lot of the music on the EP throughout the whole year. “Kill Me Slow” in particular is a record that we made within the past two months, so it’s made in this weird time, working over Zoom and Skype and going back and forth. I feel like it’s a very emotional record and neither of us have tried to play the record out in front of a crowd, ever, so I think the first time we do it, it’s going to be very, very special because of how it’s made.

What’s your production process like when it comes to working together?

MORTEN: We are both very, very excited when we make music, maybe David even more so than me! We have a lot of energy and we are creating this music without really having a reference. We’re not looking at other songs or trying to create something that’s already been made, so we have very free hands. We are just dragging melodies and ideas and sounds, and we shoot old sounds from the ’90s and the early days that inspire us back and forth, and then we just create.

GUETTA: What MORTEN says is very true. People don’t necessarily notice, but most producers, including me, [notice that] when you create, you create listening to something and trying to emulate it, and then you change it a little bit. We don’t do that. It’s such an amazing feeling to really feel that you are creating something new.

MORTEN: And I would [add] that we’ve known David’s music for so many years, and the way he works with chord progression, melodies, and songwriting is just phenomenal, so I feel like that takes our songs to a different level. I think also that’s why, especially in this time, we feel that people get attached to [this music] and have a lot of emotion about it.

How did this creative partnership between the two of you take root and what was the beginning of this soon to be movement like?

GUETTA: We were friends for many years already, but we had never worked together, and [MORTEN] played me an idea, and I was like, wow, the sonics are so crazy, and I got really, really excited by the sound of the lead, and I was like, okay, do you want to try to develop it together to take it to the next level? And we did, but we didn’t think it was going to become a movement—we were just having fun making one record.

The reaction took a while. I was playing the record and it was working so incredibly every time, but I didn’t see so much from the media or [other] DJs. I was expecting more excitement [at the beginning], to be honest. I was a little bit like, ‘oh this is strange,’ because to me, it felt like, wow, this is like a revolution, you know?

We kept doing it, and I just realized that it always takes time. It took [about] six months, the release of like three records for people to really realize [the impact of what we were doing]. It was like, every time we play those records, it’s completely killing the dance floor, this is amazing, and we started to see some people following what we were doing. We started to see tutorials on how to make records that we had not even released yet. They were just ideas that we played and people would rip the records from our set and try to reproduce them. Then I was like, something is happening.

So that’s why we wanted to come with a real statement with this EP, and also because so many DJs now are making records that sound like what we were making when we started. Now we’ve been like, okay, if we want to keep this our sound, we also need to reinvent ourselves, because people are studying to be able to do what we were doing a year ago. We need to take it to the next level and do something that they’ve not reached yet. It’s a good feeling [to see the sound emulated]. We don’t take it in a negative way. We’re flattered that people are embracing our sound, but we also want to fight to always keep innovating.

You’ve started a New Rave, how would you describe this sound in your own words?

MORTEN: It’s melodic. We take a lot of sounds and techniques from the underground, we were very inspired by underground music. I would also say that it has an epic feel to it. We use emotions from trance music.

[One of our records,] “Detroit 3 AM,” came at a weird time because everything closed down right when it was released, but it was a very important record because it really showed that we make the music we love and we don’t look at what anyone else is doing or what is expected right now. Our sound is our own, and that’s why you can’t really put it in a box. “Future rave” is kind of a sound and that describes what we are doing.

GUETTA: I’m trying to find a feeling that I had when we were playing those ’90s raves or going there to party, but with a new sound, and that’s the idea and that’s why ‘Future Rave’ is the perfect name for it. We’re not trying to be on the radio with this, or make pop music with electronic—which I am not criticizing, because I’m doing it myself—we are just making rave music that is ***y.

We’re not compromising using banging sound just to be efficient on a dance floor. We try to keep it classy the way techno does it, and you know, emotional too. It’s a combination of different elements, but it’s our own thing, and it’s nice to create your own little planet, and we welcome all the immigrants who want to come on our planet.