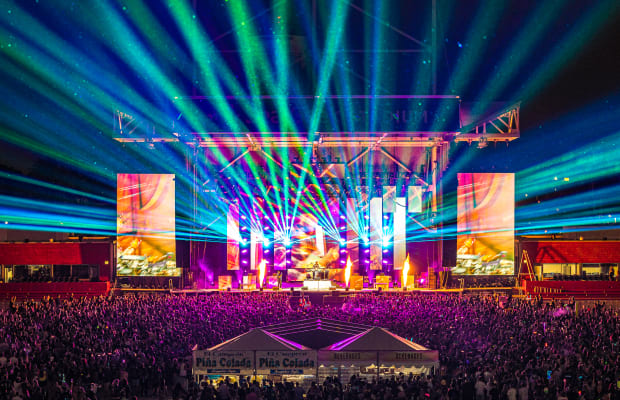 In describing the return of North Coast Music Festival, "out of this world" seems to be the prevailing ideology. And the correct one.

Not only was the lineup for the fest's 2021 edition primed to offer a special experience, but so were the venue and its production. From the "Chill Dome," where you could relax and walk through immersive art installments; to the "Void," a centrifuge of light and sound at the epicenter of the festival, the grounds were packed with entertainment to stretch the corners of the mind.

Day One was filled with overlapping schedules, but who could complain with such a stacked lineup?

The Canopy was rocking with the sounds of Dirtybird's finest, including the label's co-founder, Claude VonStroke. It was hard to take your eyes and ears away from the Wakaan takeover at Vega, where Luzcid, Champagne Drip, LSDREAM, Manic Focus, and Liquid Stranger—among others—filled out the evening time slots. Bringing on the dark of night, LSDREAM went all in with psychedelic visuals that offered a mind-bending experience.

The clouds then opened up as rain poured during Manic Focus' set, creating a glitter-like effect on the stage from the light passing through. He went on to drop songs from all over his massive discography, including a bassy rendition of "Flight of the Bumblebee."

Whethan offered throwback dance vibes with 80s-inspired disco sounds and visuals as the Stadium filled up for headliners San Holo, Kaskade, and Louis The Child. The latter hit all their classics also played out a hotly anticipated new Skrillex collab, which features smooth vocals and a dark house drop. Kaskade rounded out Day One as his seminal dance anthem "Disarm You" rang through the night. He also switched on the heat and moved into some of his newer music—the punch could really be felt as everyone chanted along to "Pow Pow Pow."

Day Two was nothing short of spectacular. The Vega stage had a different vibe this time around, featuring the melodic stylings of Sultan + Shepard, Qrion and Lane 8, among many others. The Canopy was set up for dancing, where Chicago’s own Green Velvet had his "La La Land" takeover. The star of that stage, however, was Dom Dolla, who stole the show at sunset. If you weren’t already moving and grooving, his breakthrough house hit "Take It" brought everyone to their feet in a moment of pure bliss.

As if it's possible to miss him in a crowd, Shaquille O'Neal (or DJ Diesel), came roaring in like Superman himself for a huge set. His larger-than-life personality was felt through his music as he kept the crowd head-banging along. It's clear why the bass music scene has taken him in with open arms. NGHTMRE came next, blending dubstep and trap like the electronic virtuoso he is. Not to forget his roots, he played out his 2015 breakout single "Street" for his O.G. fans.

After NGHTMRE finished up, the crowd began to grow restless before Ganja White Night took the stage for what was an interdimensional ride. If the crowd didn’t come for the wobbles, it was easy to be entertained by the mind-bending visuals that synced perfectly with their deep bass music. The duo put together a symphonic performance like none other in one of North Coast's best performances.

Ganja White Night’s dark, visceral sounds primed the crowd for the polychromatic world of GRiZ’s imagination. After an opening sax solo and a few older jams, he dipped into his new album, Rainbow Brain. Each song felt bigger than the last and it was a performance for the ages, perfectly encapsulating the vibrant brand and community he's cultivated over the years. Each laser, light, horn, and note had a purpose, striking with resounding awe.

Day Three featured a slew of sets from electronic music superstars, such as Tycho, Bonobo, and TESTPILOT, deadmau5's techno alias. As evening turned to night, Vega saw the likes of John Summit and Sonny Fodera, whose lighthearted, shape-cutting rhythms set the stage for Walker & Royce to burn down the house.

Over at the Stadium, Nora En Pure led a breezy crowd into the golden hour with her blissful sound before Chris Lake flipped the switch with banging anthems like "Operator (Ring Ring)." As darkness set in, REZZ turned the Stadium into the dark side of the moon. With a spooky ambiance and heavy bass, she took control of the crowd, owning her title of Space Mom. Not to mention a surprise visit from deadmau5, who joined her to put on a riveting performance of "Hypnocurrency."

As the final headliner for the weekend, Zeds Dead did not disappoint. Flexing a number of their classics, the set felt like an homage to the time that was lost during the pandemic.