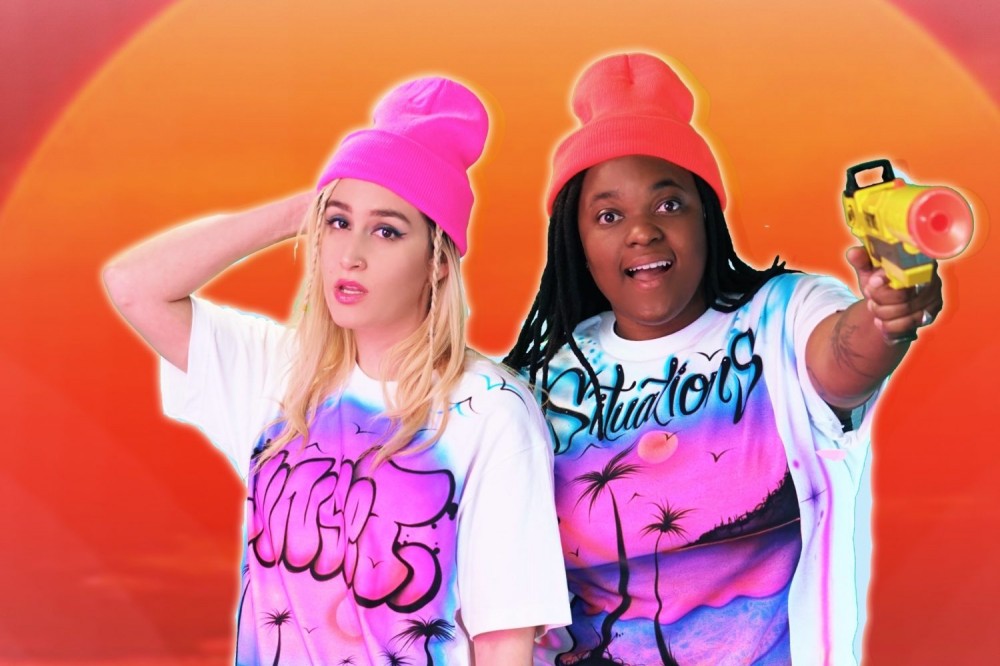 Finding two ingredients that work together with seamless fluidity is a cause for celebration. Chocolate and peanut butter; strawberry and banana. These sweet examples aptly reflect the synergistic nature of Kaleena Zanders and VenessaMichaels‘ own pairing, which has yielded a new single demonstrative of the duo’s creative chemistry, “Creme Brûlée.”

Like many relationships in the 21st century, theirs began with a complimentary Twitter exchange back in 2017. Fast forward over three years and countless evenings at Saddle Ranch—Los Angeles’ resident honky-tonk—later, the two have become a powerhouse of musical exploration.

Both Zanders and VenessaMichaels immediately bonded over their shared extravagant, no-holds-barred senses of humor and unhindered passions for their craft. For Zanders, “craft” means her role as a dominant vocalist and multi-talent who’s previously worked with Moon Boots, AC Slater, SNBRN, and more. For VenessaMichaels, it signifies her status as an ace producer and DJ whose reputation has largely been defined by the diversity of sounds that her music engages.

Together, they have used their shared qualities to bring out the best in each other, a path to collaborative prowess that has culminated in the launch of their creative platform, Go Off Studios. Go Off is the living manifestation of why these two artists work so well together: their affinity for various forms of media and entertainment, coupled with a vibrancy of personality that flavors their inventive outputs.

Go Off Studios, however, is just the beginning. Zanders and VenessaMichaels are currently preparing to release their five-track EP, Sunset Situations, due later this year. The EP is led by “Creme Brûlée,” the first single from the project to gain a release.

Dancing Astronaut spoke to Zanders and VenessaMichaels about their new single as well as the shared niche they have carved and continue to chisel with their new creative co-venture.

You two have clearly come a long way since meeting on Twitter. At what point did you know this partnership had so much potential and how does it feel coming so far from that first interaction?

Zanders & VenessaMichaels: “Literally our first session together, we were cracking each other up over the lyrics and ideas that we had. We just kept throwing ideas back and forth and we would be like, ‘write it down.’ It was effortless because we are both uncensored and confident in our process. We really just made it an experience, and we knew it was only the beginning. During the process of making this EP, we’ve grown so much as producers, writers, and just creators in general.”

“Creme Brûlée“ is the first track off Sunset Situations, due later this year. Being that this song is already very diverse sound-wise, what sort of musical exploration can we expect from the full EP? Leading off of that, can you also please describe the shared workflow that leads to such eclectic music?

Zanders & VenessaMichaels: “You can expect a little bit of everything in Sunset Situations. Overall, it’s an electronic multiverse with a touch of ’90s, alternative r&b, hip-hop, club, and house. We wanted to showcase the variety of genres that we love and that inspire us. We wanted to tell a visual story that lives in 2090. 2090 is the world we can imagine being in if the ’90s was born in the future. It is an all-inclusive, vivid, [and] bright world, and there are no limits.”

“Creme Brûlée” marks the first release from Go Off Studios, your shared label and creative platform. You’ve put out one video in the past, which combined elements of music, animation, comedy, and eccentric visuals. How does that aesthetic, which draws from so many different art forms, represent you two as people and how does it represent your friendship?

Zanders & VenessaMichaels: “We both love every form of expression and believe we aren’t limited to just telling stories through music. We both have experience creating music for TV, films, and other artists, so naturally, we are thinking in 3D. We love to pull in other characters from our daily lives, and love to get our friends involved. We bounce ideas off of each other until they come to life, and that’s why we have such a strong connection as friends and collaborators.”

With Go Off Studios touching so many different art forms, what is your grand vision for this project? Where do you see it going in 3 years, 5 years, and even 10 years?

Zanders & VenessaMichaels: “We want to have everything! Short films, feature films, music videos, merch, episodic cartoons, events that GO OFF!, a record label, a spacecraft, and a sailboat. We are literally manifesting all of it and more.”

VenessaMichaels, you’ve described your own genre of music as “2090.” How would you explain 2090 to listeners, and how does that style come to life on “Creme Brûlée?”

VenessaMichaels: “2090 is a world where cultures align from past and future worlds to indulge in a vivid, new-age experience. The world is kind, bright, and bold. ‘Creme Brûlée’ is the perfect example of 2090; the song is nostalgic, but has its own identity. There are influences of the ’90s within the emotion of it, but it was born in a futuristic state of mind. It’s an original, unique, bold, and beautiful bop.”

Kaleena Zanders, you’re known all across this scene as a vocalist, with features on hits across genres. How does it feel to be stepping into a larger role as a curator and creative director with this new EP and Go Off?

Zanders: “It feels extremely significant, because I do desire for people to see me as more than just a singer/vocalist. There are quite a few creative passions I have. In fact, I started off majoring in Radio Television and Film, but music took over my life (in the best way). It has been an amazing platform to now showcase all that I am capable of.”

With the future of shows and events still very much uncertain, what are you two focusing on for the rest of 2020 and beyond?

Zanders & VenessaMichaels: “We are focusing on our music and dialing in the world that we are creating visually, and these will be experiences that live online. We hope to collaborate with other creators to expand our project, and also help others through this time that is uncertain. It’s going to take all creators on deck for everything.”