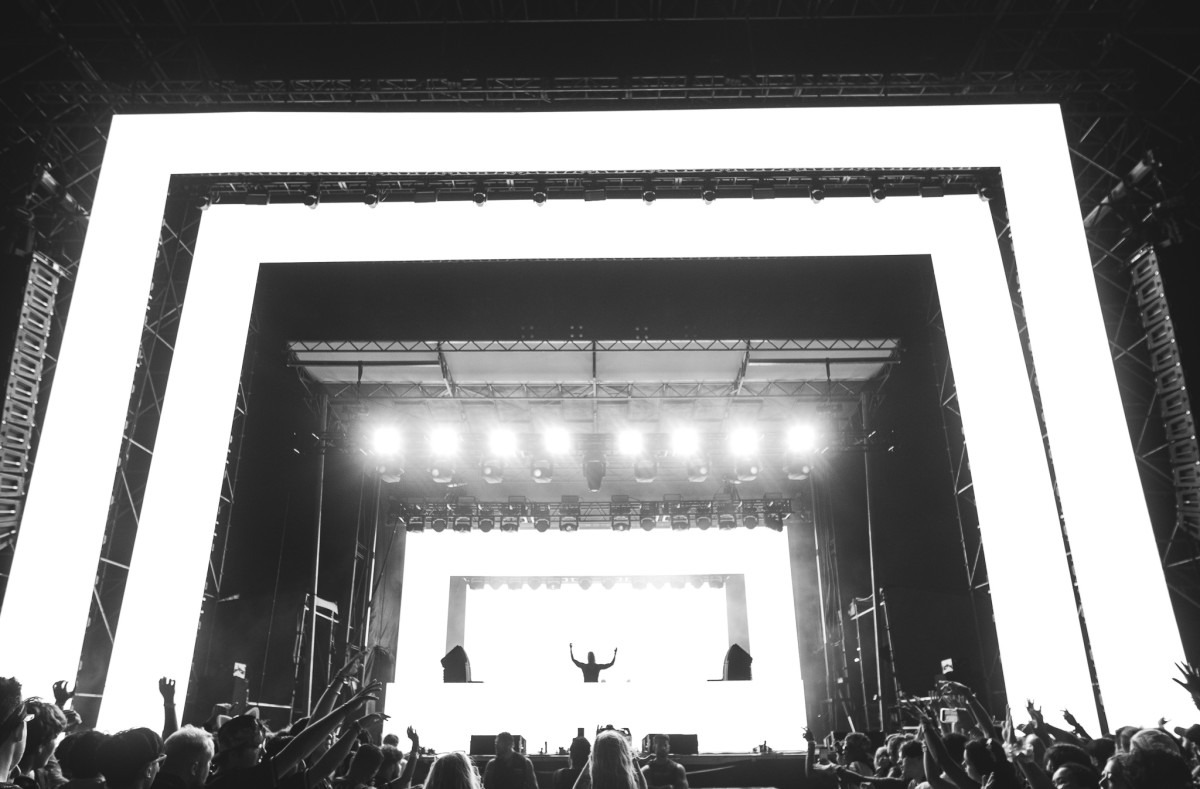 In Chicago, Labor Day Weekend is synonymous with North Coast. One of the staples of the city's electronic music festival scene, it has built a reputation not only for its outstanding lineups, but for crafting a holistic experience meant to take festival-goers—affectionately nicknamed “Coasties”—on a technicolor journey.

As you pass through the gates and take everything in—the sights, sounds, smells and palpable atmosphere—for the first time, it’s immediately apparent that the world you’re now in is completely different from the one surrounding the festival's grounds. Occupying what is normally a 28,000-seat soccer stadium and surrounding grounds in the middle of suburban Chicagoland, you wouldn’t be mistaken by believing you'd been transported to an entirely different world.

In this world, everything is a polychromatic mix of red, blue, green and yellow hues. And everyone can be whoever they want to be.

You can indulge yourself in a wide variety of culinary delights, find handmade jewelry and clothes, and take in eye-popping art installations splayed throughout the grounds. Fittingly, with each stage taking on a different identity, it was only right that the music served as the perfect soundtrack for this multicolor hub of self-expression.

The Canopy was the smallest of the three, but it by no means lacked the punch that came with the flair and bright lights of its counterparts, the Stadium and Vega stages. Situated under a white awning adorned with verdant greenery, the Canopy doubled as an oasis where North Coast's ravers could not only get away from the mayhem, but also dance their cares away to the sounds of house music’s finest.

Headliners FISHER and Diplo took over the first two days at the Canopy, filling out the stage with their Catch & Release and Higher Ground label-mates, respectively. The former—with Solardo, Eli and Fur, CID and more helming the booth—had attendees in a trance under the sunshine. The latter—complete with Yotto, Luttrell, Mayson Maynard, Sohmi and Sherm—took things more old school in a homage to Chicago, the birthplace of house music.

The star of the takeovers, however, was none other than LP Giobbi, who was named Best Music Executive on EDM.com's "Best of 2021: Industry Leaders" list last year. As her face beamed with a smile for the entirety of her mirthful DJ set, the Oregon-born multi-hyphenate left fans in awe, taking them through a cosmic daytime disco journey.

The third day highlighted a slew of leading names from house, hip-hop and R&B, with the likes of Channel Tres, Sango, TSHA, Lou Phelps and more curating a funky atmosphere to cap off a weekend of grooves. With fans camped out at the stage the entire day, the excitement was palpable as the lights went down for closing headliner KAYTRANADA’s set. Lacing the decks with an eclectic mix of hits throughout his vast, synth-laden discography, he brought the house down and had a sea of fans undulating as one.

Fans looking for hard-hitting trap and dubstep beats didn’t have to stray too far throughout the weekend. The Vega stage delivered three nonstop days worth of head-banging and rail-riding action from the finest in bass music.

Cyclops Recordings imprint was the first day's central focus, as Boogie T, Rusko, LEVEL UP, Space Wizard and more fired up the crowd and unlocked every fan’s inner beast to open up the fest. Dirt Monkey and SubDocta crafted a wonky B2B set that meshed powerful drums with wobbly bass, sending the crowd into a frenzy before headliner and label owner Subtronics. His raucous closing performance set the bar high for the rest of the weekend, leaving Ophelia Records and Seven Lions with no choice but to toss it even higher on the second day.

Trivecta, Gem & Tauri and Flynninho fired up the daytime slots, priming the crowd for a stacked end of the night kicked off by Minnesota native Jason Ross, whose signature mix of celestial dubstep and melodic bass made for the perfect soundtrack to the setting sun. Golden hour soon gave way to an eerie overcast sky—no problem for MitiS’ hard-hitting, haunting set, which blended the styles of the weekend so far into an hourlong barrage of epic sound.

Dubstep star Wooli set things ablaze during his penultimate slot, giving way for headliner Seven Lions to rise from the ashes and deliver an unforgettable performance that fans have come to expect from the inimitable California beatsmith.

It was pure anthemic, rattling, booming dubstep that literally shook you to your core, and it was the perfect summation of everything that his flagship Ophelia Record simprint has come to represent over the years. Slow, pulsating beats provided the foundation that fast, energetic drops smashed to pieces while fire spewed from the stage as fans clattered against the railing.

It was a relentless blitz of thrashing bass that built an indescribable fury within the sold-out crowd, leaving fans with no choice but to run it back and bring the same energy for the third day. Featuring closing headliner SVDDEN DEATH’s VOYD set, which has been tearing down crowds across the country, it was a full Garden of the Deceiver takeover, with the likes of Marauda, Eptic and MUST DIE! rounding out a weekend of insanity at the Vega stage.

Serving as the beacon of North Coast 2022, the Stadium stage was the culmination of its organizers' efforts to bring electronic music to the forefront of the Chicago consciousness, featuring a rotating stream of some of the biggest artists in the game. Packing out a stadium built to house tens of thousands of soccer fans was certainly no easy feat—yet time and time again, festival-goers turned out in droves to witness a revolving door of unforgettable performances.

Local stars Tres Mortimer and Gettoblaster kicked off the first day, making way for Dutch house duo Moski to pump up the bass and send the energy surging before Deorro took the stage. His trademark Latin-dance fusion made for the perfect sound to open the weekend as fans danced away on the sun-drenched grounds.

The daytime was capped off by a smashing set from LA-based duo Two Friends, who spanned the gamut of pop hits from seemingly every decade, à la their fan-favorite "Big Bootie Mix" series.

Madeon brought his stunning Good Faith Forever experience back to the city where it all started three years ago to open the night, curating an epic display of visuals and hit songs throughout his storied career.

Next up was Gryffin, who arguably gave the performance of the festival during a vigorous set that saw him show off the variety of tools he’s used to propel himself to the forefront of the dance music landscape. Thrashing on his guitar as he stood atop the booth while a cascade of lights and fireworks burst behind him, it was a prismatic spectacle to behold and served as the embodiment of the North Coast experience.

Legendary trance artist Armin van Buuren lived up to his billing as one of the most revered DJs of all-time with an ethereal closing set, turning the open-air Chicago stadium into an underground Dutch rave for the ages.

As the sunshine turned to dusk on the second day, French house music star Dombresky blew the stadium wide open with a pounding set, mixing in his club staples with 80s-style disco and future funk to set off an instant dance party under the clouds. Said the Sky ushered in the night with a stellar performance chock full of transcendent crossover hits from Owl City, Yellowcard and Panic! At the Disco, which had phone lights up and voices chanting in unison.

Rounding out the night, Tchami and Malaa delivered a hellish "No Redemption" house set, setting the stage for generational superstar ILLENIUM to close the day with a true production in every sense of the word. Throwing in shimmering pop anthems with twisted dubstep, the Colorado mega-producer showed why he is perched atop the EDM landscape, as his ability to turn an entire stadium of diverse tastes and styles upside down is unmatched. Fans were also in for a surprise when he debuted a brand new unreleased song, "Worst Day," an emotive banger created alongside prolific singer-songwriter MAX.

The last day of the festival saw the Stadium become a centrifuge of otherworldly euphoria. Jai Wolf brought in the night with the very last show of his three-plus year "Cure to Loneliness" run. It was a set fit for the end of an era, as the clouds opened up to create a drizzling effect perfect for the nostalgia of Wolf's signature melodic sound.

Surging bass music duo SLANDER brought their signature brand of dubstep and future bass to the mainstage, with their pounding clash of screeching bass reaching well beyond the stadium's walls. The final act of three days of nonstop ecstasy was none other than Porter Robinson and his scintillating Nurture live show, offering an emotive closing performance to encapsulate the visceral North Coast experience.

You can check out our exclusive North Coast 2022 photo gallery below. All photos by Christian Wade for EDM.com.