Moby has cancelled the book tour promoting his second memoir, Then It Fell Apart, after controversy regarding his perspective on specific events.

The most vocal criticism leveled at the iconic producer and DJ has been in reference to his claim of having dated Natalie Portman. In his memoir, Moby claimed Portman was 20-years-old at the time, when in fact she was 18. Portman contests that they’d never dated in an interview with Harpers Bazaar. She reduced their relationship to “a much older man being creepy with me when I just had graduated high school.”

Initially, Moby pushed back against Portman’s characterization of his behavior in a since-deleted social media post, featuring a photo of the two (in which Moby was shirtless). His caption for the post read that Portman’s words “confused me, as we did, in fact, date”. 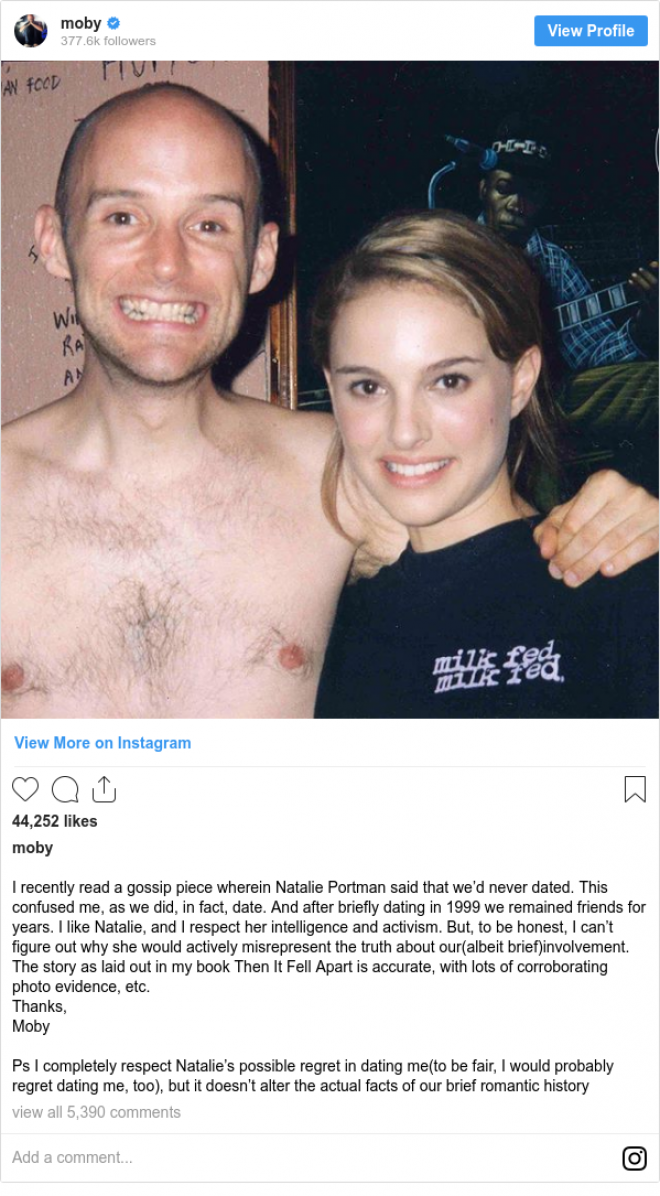 In a subsequent social media post, Moby later accepted responsibility for failing to consider her feedback, and for declining to fact check the validity of his assertion before the book was published. “I fully recognize that it was truly inconsiderate of me to not let her know about her inclusion in the book beforehand, and equally inconsiderate for me to not fully respect her reaction.”

As a result of these events, Moby has elected to “go away for a while”, and will not be touring to promote the book anytime soon.

The memoir is full of ripe moments, detailing Moby’s early days as an icon. From touching Donald Trump with his “flaccid penis” at a party, to oogling prostitutes at 1am in the shadows of King’s Cross, Then It Fell Apart offers a vulnerable window into Moby’s reality, from his perspective.

As some time has passed I've realized that many of the criticisms leveled at me regarding my inclusion of Natalie in Then It Fell Apart are very valid. I also fully recognize that it was truly inconsiderate of me to not let her know about her inclusion in the book beforehand, and equally inconsiderate for me to not fully respect her reaction. I have a lot of admiration for Natalie, for her intelligence, creativity, and animal rights activism, and I hate that I might have caused her and her family distress. I tried to treat everyone I included in Then It Fell Apart with dignity and respect, but nonetheless it was truly inconsiderate for me to not let them know before the book was released. So for that I apologize, to Natalie, as well as the other people I wrote about in Then It Fell Apart without telling them beforehand. Also I accept that given the dynamic of our almost 14 year age difference I absolutely should've acted more responsibly and respectfully when Natalie and I first met almost 20 years ago. Moby