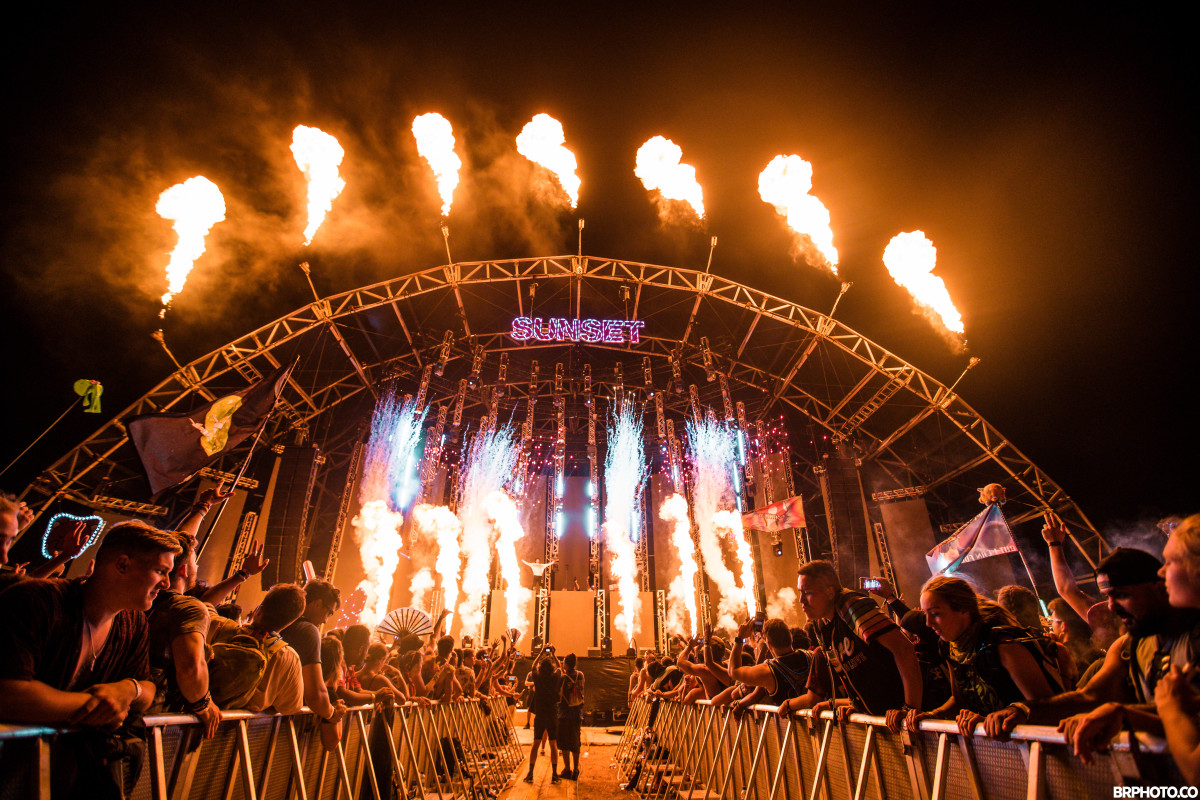 This past weekend Sunset Music Festival came back to life as the first normalized fest to return in Florida after the pandemic, an emotional billet-doux straight to the heart of fans. Based in the bustling cultural hub of Tampa, Florida, the two-day festival took place on May 29th and 30th, hosting 64,000 fans and 74 different artists from around the country.

With the city quickly filling up with patrons for the festival, SMF kicked the weekend off with a sold-out pre-party. Hundreds and hundreds of music fans made their way to the venue in hopes of arriving early for free entry. Held at the historic The Ritz Ybor in Ybor City, the pre-party boasted a talented lineup of some of Florida's local best artists.

Dazy opened up the night with a riveting set, followed by Celo, who took the stage with high energy and fast cadence. Bringing with him an arsenal of genre-defying bass tracks and rattling low-end tunes, Bernzikial followed and got the crowd moving. The night continued on with a closing set from local fan favorite Lizzy Jane, who dropped a wide array of filthy dubstep tunes.

Just as the night seemed to be coming to a close, special guests Bawdly and Blunts & Blondes stepped on stage for a surprise set. With a massive lineup of talent, the SMF pre-party had no shortage of brilliant production and good times, the perfect way to welcome the festival weekend.

Kicking off the first day on the Eclipse stage was Bernzikial, Archived on the Cool Down Get Down Stage, Hunter Reid on the Horizon stage, and Trivecta on the Sunset main stage. During Trivecta's set, he announced a new song called "Wild And Broken" with Seven Lions and Blanke, which you can listen to here.

As the day progressed, we saw some incredible performances from artists like JVNA, Lucii, Party Favor, Kendoll, Lizzy Jane, Vampa, TYNAN, and Kompany. Each stage boasted an impressively colossal production, with a monstrous array of LED panels, and dozens upon dozens of beams, among other lighting fixtures. These world-class stages looked more like monuments, and were a sight to behold in and of themselves. Disco Donnie Presents brought all of the efforts for this event, and it showed in the production.

With the heat of the day continuing to rise, event organizers were ten steps ahead and had prepared an entire stage dedicated to chilling temps down with its indoor air conditioning, complete with a roof for shade. There were also dozens of outdoor air conditioners scattered around the grounds, including two massive air conditioners placed in the center of each crowd which misted out cold water all day, leaving fans standing near them a bit wet but comfortably relaxed. A welcomed addition to when Tampa's blistering heat got to be too much. A subtle touch, worth noting that the level of preparedness and care the event organizers put into throwing SMF was apparent. It's no easy feat housing tens of thousands of fans, and Disco Donnie Presents did so safely with precision.

With the hottest part of the day coming to a close, the sun began to set over the horizon as Said The Sky stepped out on the Sunset stage. He played an immaculate set and was joined by Day Gatsby for a few songs who played the snare drum. Later Said The Sky performed an unreleased song written with ILLENIUM called "Crazy Times." Moments earlier at the Eclipse stage, TYNAN had just finished playing a high-energy set where he started a mosh pit. Kompany threw a monstrous set down after, which brought in a massive crowd. Midnight Tyrannosaurus and Kai Wachi continued on the heavy bass before Wooli took the day into night with a wild set full of emotion and rich bass. Wooli also played out his recently released song with Seven Lions and Amidy called "Shadows."

Back on the main stage just moments before Adventure Club walked on, SMF played a message over the speakers that read, "We are back, our hope, our energy, our unity, all that unites us brought us back to this moment, our sunset moment. Let's cherish it, let us be grateful, let's feel the joy. Let us all connect again under the sunset. We are Florida's first festival back."

Adventure Club brought their classic sound, pushing decibels through the speakers that had the crowd pumping to each track. Later in their set, the guys hopped on the microphone to announce a new unreleased song that they played but did not name.

As NGHTMRE came out for his set, he did so with enormous energy that the crowd was ready for, bringing with him a stage that lit up with fire cannons and fireworks. He played a number of his hit songs, including his new song with Alexander Smash called "Speak Easy," where Smash came out and joined him on stage during the song.

While Sullivan King and Zomboy closed out the night on the Eclipse stage, Seven Lions stepped out on the main stage to bring a wrap on Day 1. With a colossal set full of fan-favorite tracks, Seven Lion's set harbored a vast array of pyrotechnics and energy that rocked the crowd, taking them on an emotional rollercoaster of a journey. Ending the first day was a massive display of fireworks that lit up the sky overhead behind the main stage.

As fans fueled up on coffee and food, just like that it was time for Day 2. The festival's second day boasted an equally impressive lineup, including heavy hitters and rising artists. Starting things off was one to watch, SWARM, who woke the crowd up on the Eclipse stage, giving them 100% and rocking the crowd with his infectious energy. Following on the eclipse stage, we saw massive sets from TVBOO, Esseks, Conrank, Inzo, Champagne Drip, and LSDREAM, Riot Ten, and 12th Planet each bringing their own individual set of high energy and deep bass.

The house stage dubbed the Horizon Stage saw a wide variety of house artists including Taiki Nulight, who put on an impressive performance, bringing all the vibes to his set. Other avant-garde artists such as Kyle Kinch, Sage Armstrong, Lubelski, Doc Martin, Yolanda Be Cool, Cut Snake, VNSSA, and Drezo performed inspiring sets keeping the house vibes alive at this stage all day long.

Heating things up later in the night at the Horizon Stage was none other than the legend himself, Destructo, who played a heavy set of high-energy house tracks that took the crowd on a journey and history through house music. Right before Destructo's performance, we had the chance to sit down and talk about life, festivals, writing and producing music, including new music releases and more, which you can read in an upcoming interview. Following an incredible set by Destructo was Shiba San, who took the audience by storm with his infectious energy. Green Velvet closed out the night and brought a sure-fire set that had the crowd moving all night.

On the Sunset stage, we saw sets from fan-favorite Decadon, who performed a rocking set packed with emotion and heavy-hitting dubstep tunes. Fans in the front row were headbanging so hard that the railing was lifting off of the ground. Later, Decadon got on the mic to tell fans a passionate and heartfelt story about the loss of his father, and he asked the crowd to sing along to his and his dad's favorite song, "Chasing Cars" by Snow Patrol. It was an emotional moment, which brought the crowd to tears and saw fans putting their arms around each other holding on to one another.

Following Decadon was another fan-favorite, Kaivon, who lifted the crowd with his bright and melodic future bass sound. Nitti Gritti B2B Wuki brought the festival vibes to the party which got fans jumping. Valentino Khan and Malaa rocked the audience and kept the energy going into the sunset as TroyBoi took the stage during sundown. Following a loaded set from TroyBoi, the crowd prepared themselves for the most anticipated show of the weekend, SLANDER.

When SLANDER took to the stage, the crowd was ready. Starting off with some of their classic tunes, SLANDER kicked things off with tremendous energy. The pyrotechnics went off, and it was a sight to behold. The sound energy and emotion that poured out of the speakers had fans in a state of trance. It was pure, unfiltered energy. Their set was an emotional billet-doux directly to the hearts of fans. There were emotional highs followed by intimate lows. SLANDER took the audience on a journey through time, pushing and pulling on all of the heartstrings. Towards the end of their set, SLANDER got on the microphone to announce their new festival curation called STARBASE, and the stage went dark reading only the words Starbase, you can read more about the new festival here.

Following an impressive performance from SLANDER, the festival was coming to a close, and there was no better way to end the night than to be hypnotized by the space mom herself, REZZ. With an enormous set of trance-inducing visuals paired with huge bass and a massive amount of pyrotechnics, REZZ delivered an immaculate set to bring the weekend to a close.

Sunset Music Festival delivered a tremendous weekend festival experience. An experience those who were there will never forget. Every artist who performed delivered an enormous set with their heart and soul pumping through the speakers. With so many people deprived of live music this past year, emotions poured out with joy and happiness as we all united together again. SMF 2021 felt like an even more memorable event because of this. As festivals continue to roll out throughout this year, SMF 2021 will stand as one of the most remarkable events, being one of the first back, there was a special energy that could be felt. The event brought a true sense of unity and shared togetherness to all the people in attendance. There is no doubt that Sunset Music Festival 2022 will be one not to miss.

Check out our full Sunset Music Festival photo gallery below.