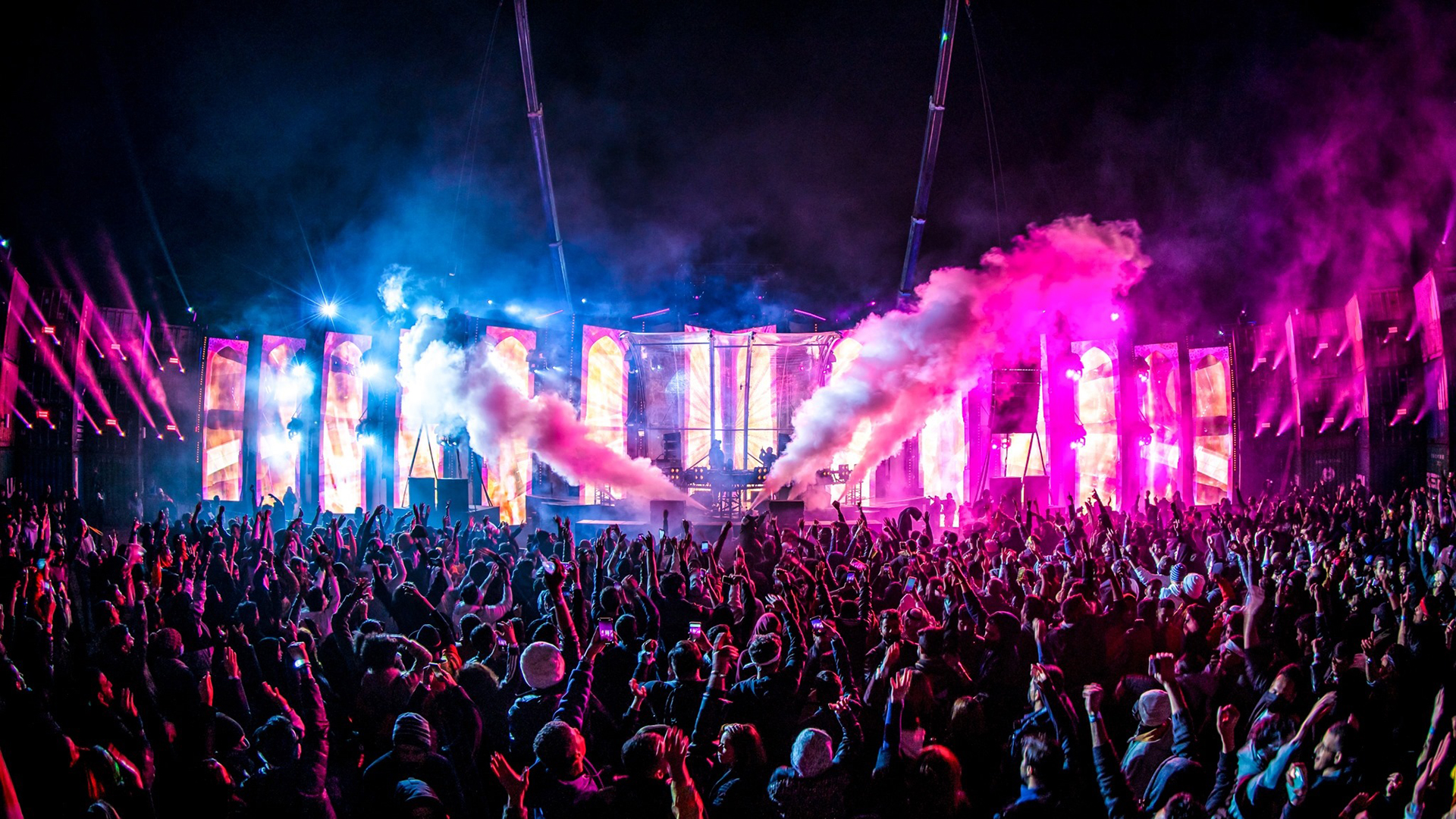 Even before the pandemic forced borders to close, there were already isolated countries, cities, and regions. Geographical isolation is often easier to overcome than ideological isolation. Sometimes the walls are so high that not even music can break them down. Fortunately, this reality seems to be changing in Saudi Arabia, as David Boyle described in this year’s IMS Business Report, presented two days ago.

The world does not stop spinning and is constantly changing. However, we cannot wait for evolution to happen organically, and the electronic music industry and all its players have an active role in the mission of spreading love through music. In the not-too-distant past, thinking about the dance scene in Saudi Arabia was unimaginable, either as a raver or as an artist. Djing and dancing were not legitimized and was seen as something outlawed. The path towards democratisation is still in its infancy, but the positive impact can already be felt. 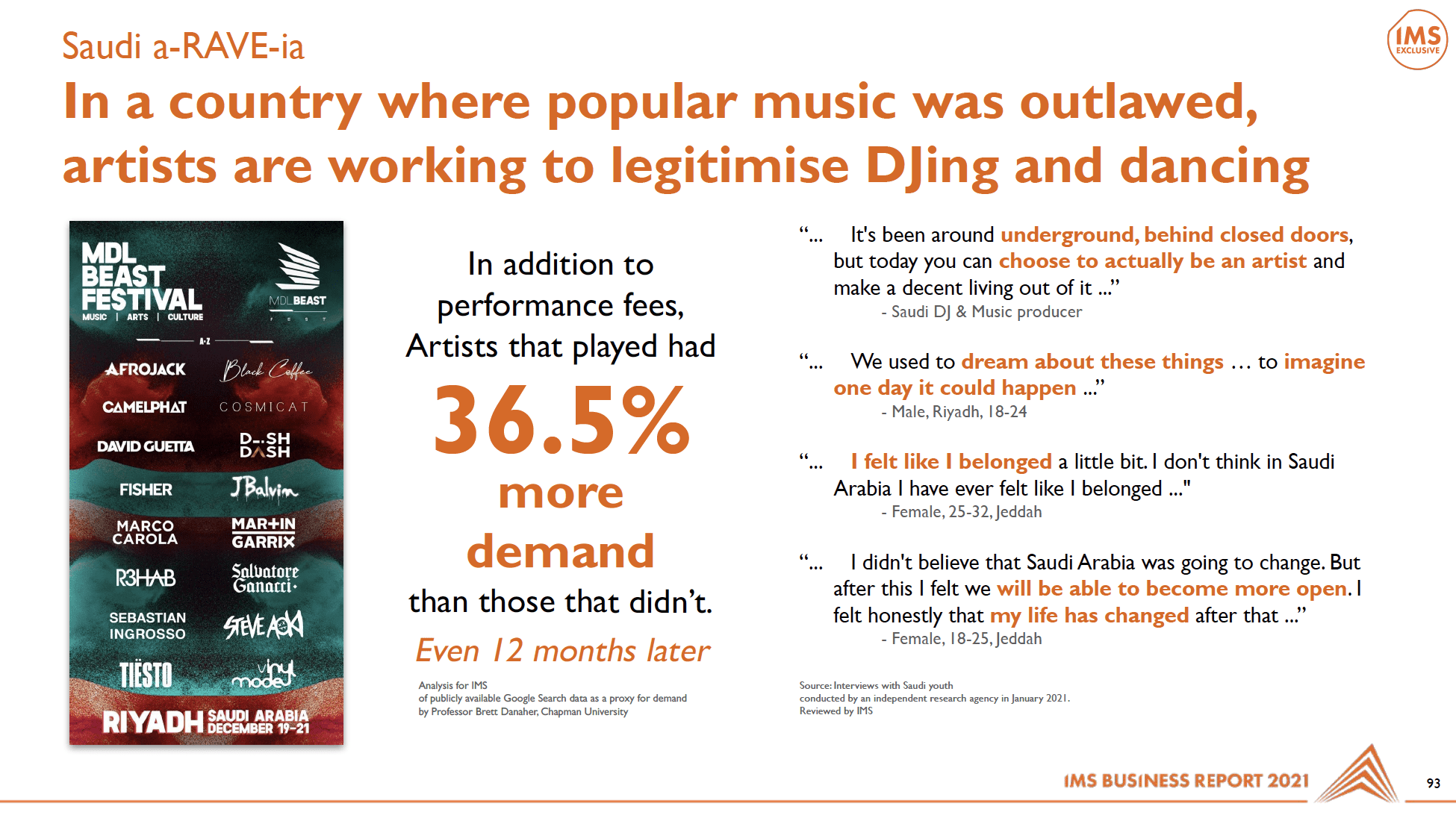 Saudi Arabia has already hosted some festivals and parties, opening the doors to the dance scene. The arrival of these events has brought a breath of fresh air to the young people, whose dreams and ambitions travel secretly through the western world. Music brings them closer to other countries and other realities, making the territory a more fertile soil for their fulfilment. Opening to the dance music culture gives a new lease of life to music lovers and also to artists, who begin to be able to develop their careers as Saudi exports rather than having to move abroad. Another interesting insight into the festivals taking place in Saudi Arabia has to do with the demand of the artists filling the lineups. In the analysis for IMS of publicly available Google Search data by Professor Brett Danaher, Chapman University, it was concluded that the MDLBeast Festival held in Riyadh in 2019 led to a significant increase in demand for the artists who performed at this event, compared to similar artists who did not participate. 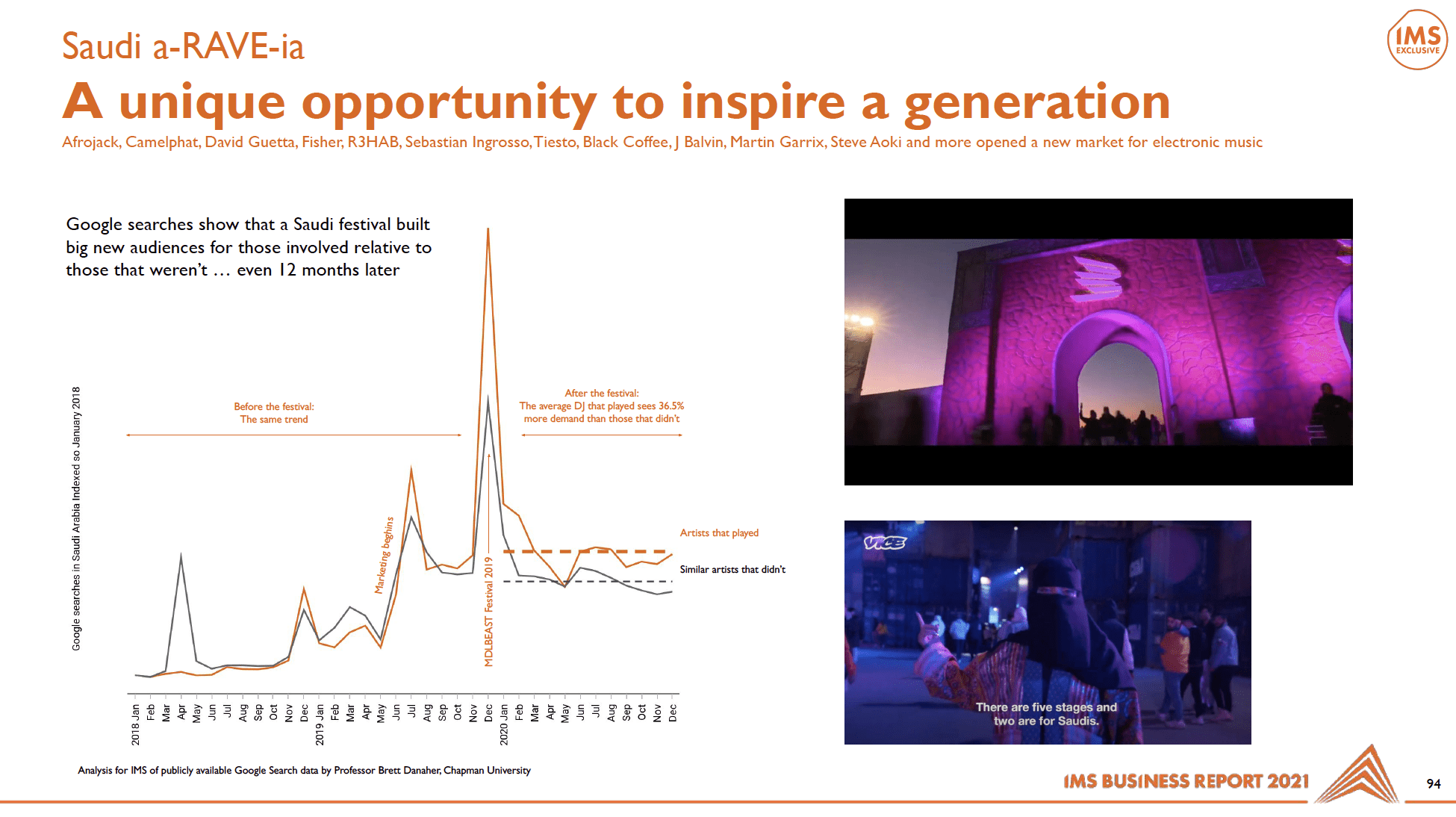 This audience growth peaked at the time of the festival and has continued to echo in the twelve months that followed. This data is inspiring and should motivate the industry to continue to invest in this new and emerging market. There is a new generation hungry for culture and quality music, a demanding market that can and should be fueled by a diverse offering. Artists like Afrojack, CamelPhat, David Guetta, Fisher, R3HAB, Sebastian Ingrosso, Tiësto, Black Coffee, J Balvin, Martin Garrix, Steve Aoki and more opened the door, and now Saudi Arabia is more open.

The data exposed in the IMS Business Report are important and deserve a deep reflection. More than that, the information should be taken as an important tool to propel change.