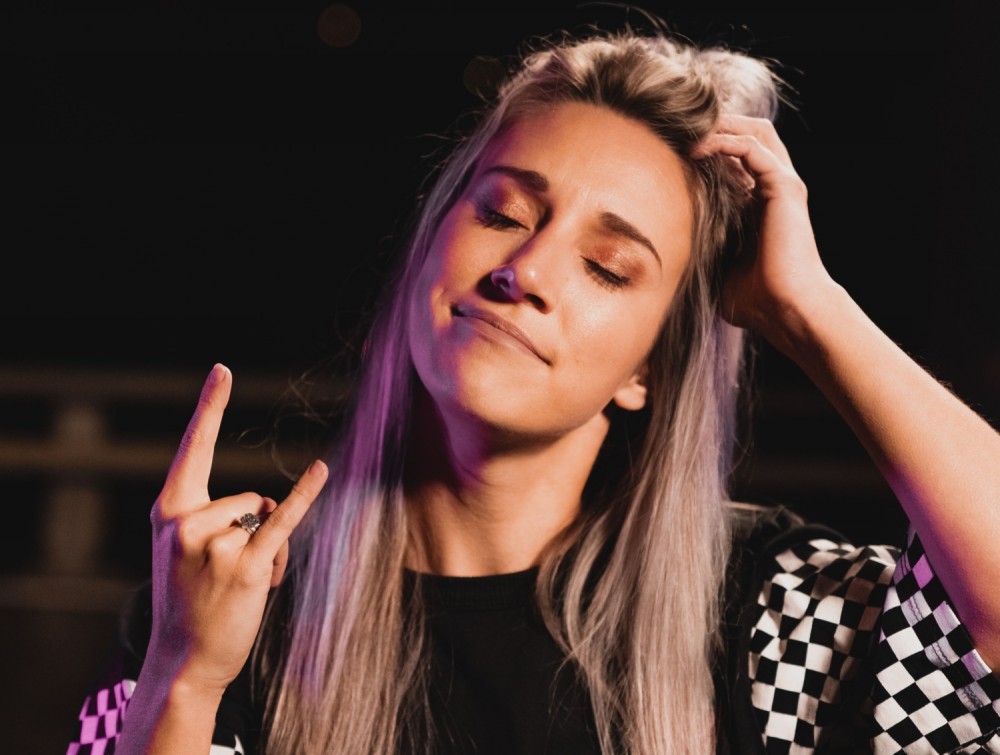 Don’t judge a book by its cover. This is the approach to take with Sippy on every level of her work.

A look at this native of Sydney Australia (whose real name is Laura Patterson), with her diminutive stature and affable smile, might create the impression of gentle reservation, and in an interview environment such as the one she agreed to with Dancing Astronaut, this is impression rings absolutely true. As an artist, however, Sippy is free of any limitations; foul-mouthed and ready for action.

On stage Patterson is ferocious, challenging those in the crowd to match her vehement enthusiasm as she leaps from the decks to the crowd to the lighting rig without missing a double drop. In the studio, Patterson consistently releases some of the heaviest music in the Deadbeats catalog which includes her latest single with ZíA entitled, “Dete,” a dubstep track that harkens back to the genre’s golden age of gruesome and grimy.

Now after years of hard work in Australia along with multiple rejected visa applications, Patterson has come all around the world to the United States. We discussed her introduction to bass music, her first US tour, and more. Continue below to hear “Dete” and get the full story on one of dance music’s brightest new torch carriers.

What is it about bass music that made you want to dedicate your craft to this sound?

Then when I started DJing, I jumped on Soundcloud and I literally went through every single genre heading and listened to around 20 tracks. House, techno, hip-hop, and all those little sub-genres. So, I went through and when I started listening to dubstep, I loved how technical it was, but I also loved the shock value of it. You think it’s going one way and then it completely goes another, and you can’t always predict where it’s going to go.

Also, I found it amazing that they’re writing these tracks, and they’re completely making their own instruments and their own sounds that never existed before. You can obviously argue that you do that in every genre, but specifically with dubstep they essentially create a chorus made out of weird sounds that they’ve made from scratch.

But really it was the shock value of it. I loved that you didn’t really know where you were going to land after the buildup and once you get into that drop and see and feel that reaction it’s like holy shit.

Do you have a favorite dubstep artist?

“Yes. Well it’s hard. I definitely have a few that are my favorites, but it depends whether you talk about favorites as in who at the moment I think is absolutely killing it versus my inspirations from the past.

I think my inspiration is actually not so much from common music that’s being written right now. It’s based more on if I hear it and go, ‘fuck that’s amazing.’ I love everything that Svdden Death writes. Also, Leatrix who maybe a lot of Americans don’t know. He’s like 19 years old. He’s from Sydney Australia, and he’s fucking insane.

And of course, Zeds Dead. I mean I have so much more to do with them now, but before I got into the dubstep, the first dubstep tune I ever heard was that ‘Eyes On Fire’ remix. I thought it was fucking crazy. It was the wildest shit I had ever heard, and they’ve always been the real OG heroes to me.”

You’ve had several releases on Deadbeats, you’re playing Deadbeats takeovers all over the world. How does it feel to be a part of the Deadbeats family?

“It’s been really incredible. I think when you’re in this industry or this career you’re always looking at the next thing, and so even though I’ve got some tracks released on Deadbeats I feel like I need to release more better ones. EPs. Albums. I’m thinking so much more like that. I don’t feel like I can cruise. It’s almost the opposite.

However, a year and a half ago, I told my family, ‘Can you just make sure when something big happens that you pull me aside and tell me to pay attention to this?’ Because I think the problem is that you’re always looking for the next thing and you don’t actually sit and soak up the successes happening. I’ve definitely gotten a little bit better at that in the past six months. Not to feed my ego in any way, but just for those days when I’m struggling and things are hard I can remember that moment.”

You have to give yourself credit for what you’ve done.

“Exactly. That’s what I started doing with Deadbeats. I think it happened more so with ‘Ghosts.’ The first one, ‘Lithos’ which was on the compilation, was awesome, but I guess it was a bit different because it wasn’t a single. It was a package release whereas ‘Ghosts’ was all me and people are into it. I really have loved working with Deadbeats and the culture there is really good which I love. That’s important as well. Being around cool nice people.

It sounds like beyond releasing your music they are very supportive of you as both an artist and a person.

“Yeah, definitely! The other good thing about them is they’re quite open minded. They don’t force me to release all my songs with them. They want the songs that make sense to be released with them. I’ve also released with Dim Mak and they’re totally cool with it. I know even between Dim Mak and Deadbeats, quite often they’re even putting the songs from each label on their playlists. They’re supporting each other because they’re open-minded to music rather. That’s what you want to be a part of.”

How was the Dete Tour? What’s it like seeing such positive reactions to your music and sets from a worldwide audience?

“It’s like actually insane. The tour’s been great. It’s been nice and busy. Plenty of people coming out for it. It’s been awesome in places I had never heard of before. I find it bizarre because I don’t know where everyone’s hiding.

I’ve loved traveling through America because I feel like every state is almost like a different country. People from everywhere are quite different. There are obviously a lot of similarities, but culturally there’s a different cultural pocket in every state. Even within that state, there are other cultural pockets which I find super interesting and, on that front, I feel like I have been amazingly accepted. I love that everyone is so nice friendly hospitable.

I feel like I’ve been accepted because it’s a sense of community across the whole country. It’s like we all get this music thing. And as I’m traveling along it’s like you have that similarity and that’s what helps you bond.

I got to Washington D.C. and it was a Wednesday night which made me thing it was going to be a slow show. We got there quite early because we had come from dinner. It was like doors so there weren’t that many people there which made sense to me. I’m a random chick from Australia. Makes sense. Then I come out to play and it’s fucking rammed and I’m just wondering what the fuck all these people are doing here.

I’ve gone to some of these cities and it’s fucking wild how much fun it is. I had never met ZíA before, and we’ve had an absolutely amazing time. I’ve slowly just unleashed it on her where I’m just like ‘I’m fucking here.’ Usually, I just play on my own but we’ve been playing out ‘Dete’ and when I put on this song I jump up on the rafters and I swing around or I’ll jump on the barricade and start head banging with some random person or jump up on the decks hold the roof to make sure I don’t fall over. She said to me one day “I don’t know what you’re doing or what comes over you. You can just tell me, and I’ll be up for it.” And “I’m like I don’t know what’s going to happen I just do it!”

How did “Dete” come about? What was it like working on music with ZíA?

“Essentially we realized that we would be touring together and wanted to write a track together that we could play out to start our back-to-back sets for each stop. I sent over a track idea to Lex ( ZíA), and then she came up with the whole Dete idea as telling our story. It’s about breaking off from the normal social constructs and forging your own path. Working with ZíA definitely gave me more insight into the American dubstep scene in terms of music.”

So basically, the chemistry was already there before you started writing?

“Our friendship became super strong from touring, being in each other’s pockets constantly, but we kind of became best friends instantly when we met each other. I honestly have so much love for her. Once we were that close, writing music together felt easy and natural. We were just honest and open with each other which makes writing with someone way easier.”

What are some other differences between touring in the US and touring in OZ?

Then people started asking whether I was going to play my music and they seemed bummed that I didn’t. I was like ‘oh, you guys want to hear my songs,’ and they told me they listened to them every day. I didn’t really think about it. These people obviously are coming to listen to my songs.

I was playing more unreleased tracks or the more recent ones. I didn’t think about the tracks that I released a year or two ago. People in Sydney had heard them plenty of times, but the people in Washington DC have never heard me play before. So, after a few shows I shifted my set a bit and put more of my own music in my set.

But yeah honestly seeing how many people come out to shows here has been awesome and just seeing the people who are actually coming to see me is great and awesome and it just makes me want to work harder because I need to show there’s a reason that you guys have been following me from halfway across the world.

The other thing is America is so big. There are so many people, but also there’s so many people that want to hear bass music. I’m used to OZ where we have a few awesome events for bass music and that’s it. They’re only on certain nights. You can’t play four nights a week in OZ and have a big crowd whereas here you go on a Friday to somewhere I’ve never heard of and there’s hundreds of people there ready to hear it. They want to hear it.

Especially when I played the more mainstream events or festivals when people are there to listen to bands. They don’t want to hear me chop riddim for an hour. At those shows I kind of have to lease them into it, but that’s the thing about being over here. Everyone wants to hear bass music. That’s what they’re there for which really awesome.”