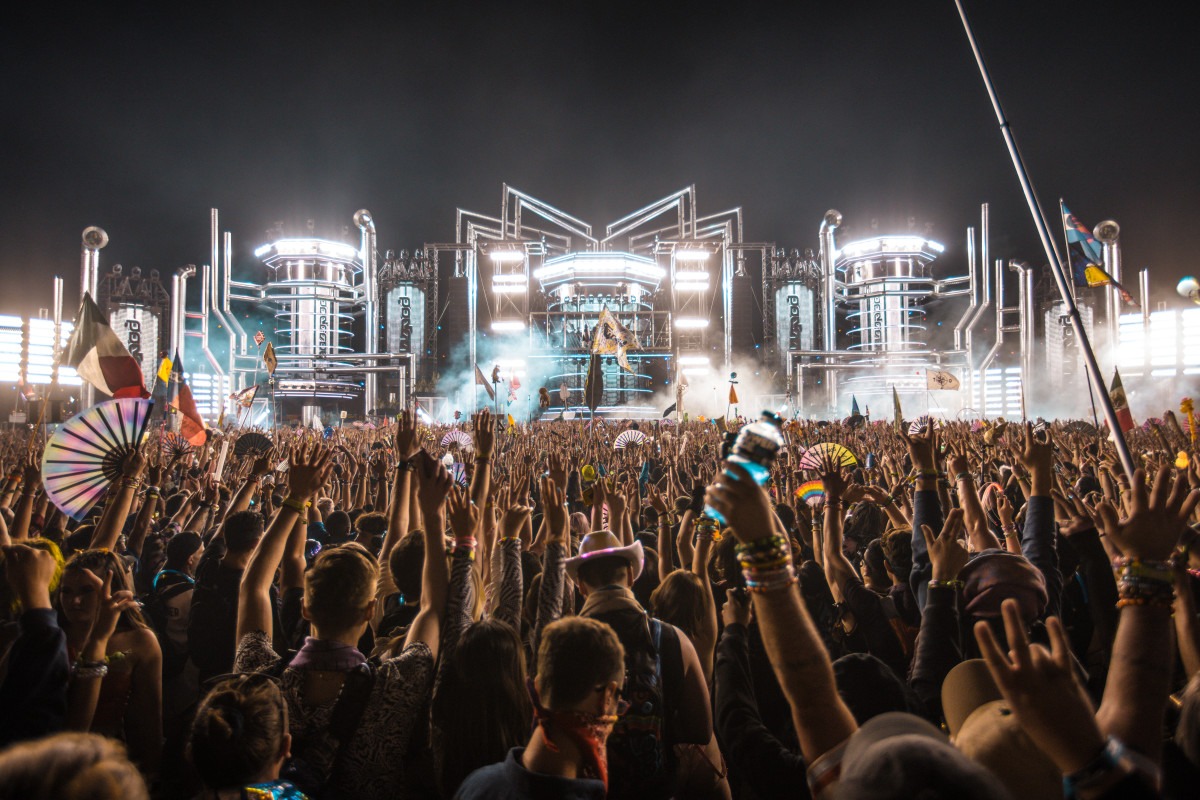 Despite being one of the festival circuit's most established brands with over a quarter century of success, EDC is defining the festival landscape of the future with greater impact than ever.

While it had only been seven months since the conclusion of EDC Las Vegas' 2021 edition, the Insomniac team didn't hesitate to bring several statement-making innovations to the Las Vegas Motor Speedway this year, galvanizing concert-goers and artists alike to reimagine the seemingly endless possibilities powering America's largest dance music festival.

The primary reason for the condensed turnaround was due to pandemic-related restrictions, which ultimately caused Insomniac to push EDC 2021 from their regularly scheduled dates in May to the latter half of the year in October. At the same time, the company, which had spent the better part of 2020 hosting a series of livestream events called "Virtual Rave-A-Thons," was also making concurrent plans to host a digital edition of EDC called Insomniac World Party. The event would ultimately become the first music festival to take place within the Roblox metaverse.

While the last two years of livestream- and metaverse-based events proved Insomniac could adapt—and even thrive—in a pandemic setting, 2022's in-person festivities showed that the brand is continuing to explore the promises of various emerging technologies in order to keep its flagship festival experience firmly positioned on the bleeding edge.

In total, approximately half a million dance music fans from around the nation and the globe made the trip to attend performances from over 300 artists throughout the weekend. As far as programming is concerned, the EDC lineup itself is always a buzz-worthy topic of conversation, but when you host the equivalent of the dance music Met Gala every year with unwavering consistency, delivering surprises becomes an inherently creative endeavor in its own right.

To that end, organizers made strategic investments into the show's production, creating an entirely new stage in the bionicJUNGLE while augmenting several existing stage arrangements. The bassPOD stage in particular won the unofficial superlative of "most improved" as fans marveled at the technologically advanced visual setup.

The term "immersive" is thrown around as an experiential descriptor all too often, but with towering visual panels surrounding attendees on three fronts as they approach the stage, EDC production setups like the bassPOD enable fans to feel more connected in the moment with their favorite artists than ever before. The panels, designed as lab tanks fitting for a mad scientist, featured neon lights coursing throughout the system's power grid.

Fans found themselves captivated in awe at the elevated experience as Rusko, Excision, Getter, Space Laces and more delivered headbang-worthy hits throughout the weekend.

Adding to the spectacle of its industry-leading stage productions and world-famous firework displays, drones are becoming an increasingly important part of the EDC experience. Between welcoming attendees on the festival's first day with an opening visual ceremony to filling brief intermissions on the main stage—and even playing a role in the performances themselves—you never quite knew when to expect Insomniac's team of polychromatic robots to zip into action.

Like a futuristic marching band, dozens of drones coordinated seamlessly into a complex series of illuminated arrangements, including the high-flying Insomniac owl, a glowing welcome sign that read "EDC Las Vegas" and the face of a giant character from the Bored Ape Yacht Club NFT collection. Taking the shape of Tiësto's own eagle insignia high overhead during his headlining performance on the main stage, it's easy to see how the role of drones will likely continue to evolve and augment the action happening on stage in ways we may not even be anticipating.

Much like the broader festival scene in a post-pandemic environment, the NFT space is increasingly straddling the worlds of conventional reality and our new digital frontier. At EDC Las Vegas, a new digital art gallery emerged featuring limited edition prints by Tiësto, Lil Texas and mau5trap, among others. The new age art displays allowed digital asset collectors to easily peruse and purchase the latest and greatest NFT offerings from the electronic music community on the spot.

Fittingly, this year's EDC also became the perfect launch ground for new NFT projects and partnerships. Tiësto announced his foray into the NFT arena with the launch of "All Access Eagle," a token that will be the first of a soon-to-be-revealed ecosystem of collectibles and exclusive perks surrounding the chart-topping DJ. Meanwhile, art-pop superstar Grimes grabbed headlines after airdropping NFTs to fans live during her performance on the cosmicMEADOW stage. Facilitated in partnership with ZASH Global Media, the NFTs made an expeditious journey from a space satellite straight to the phones of eager attendees.

Attendees were also provided a path to explore the festival through the lens of augmented reality at this year's edition. When it was first announced that Snap Inc. and Live Nation (Insomniac's parent company) would be engaging in a multi-festival partnership that would see the launch of proprietary AR experiences, it was difficult to conceptualize what exactly that would look like. There is, of course, a certain knee-jerk reaction that occurs with the suggestion that concert-goers may now have more reasons to be on their phone at shows, but seeing the fruits of the partnership in action has us excited about the long-term prospects of the technology.

Together, EDC and Snap elevated festival content generation with the rollout of mesmerizing visual lenses. The Daisy and Night Owl lenses gave creators the ability to manifest powerful AR visualizations at their fingertips, sprouting towering, kaleidoscopic daisies and a larger-than-life version of Insomniac's signature neon owl with the push of a button. The virtual landmarks tracked spatially with ease and created opportunities for content generation going well beyond the simplicity of point-and-shoot.

Beyond the unique content opportunities, the launch demonstrated the utility of Snap's AR technology and its ability to solve persistent problems plaguing even the most seasoned festival-goers. Snapchat's AR Compass lens gave EDC attendees the opportunity to familiarize themselves with the expansive festival grounds by rendering a miniature 3D model of their surroundings with calibrated consistency. The lens proved perfect for navigating the Las Vegas Motor Speedway throughout the weekend, and with performance schedules embedded into the metadata of each stage, all the critical day-of information one could want was just a tap away.

Meanwhile, the Friend FindAR lens was solving another age-old problem: helping fans to reunite with their friends. Using Snapchat's geo-location technology, two users in different locations of the festival could easily set each other's location as a waypoint and allow Snapchat's virtual compass to take care of the rest.

Engaging the Friend FindAR lens yeilded an on-screen compass showing the real-time distance between the two users. The technology's real-time feedback and spatial precision made reuniting amid a crowded landscape a breeze rather than a dreaded chore. With a base of over 332 million users, it's easy to see how Snapchat becomes the ubiquitous bridge between the real world and augmented reality that the festival landscape needs in order to continue exploring how the next generation of mobile technology can elevate and improve the festival experience.

As they've done for roughly three decades, EDC Las Vegas organizers continued to excel in the worlds of curation and production, assembling an experience that intrigues and inspires EDM fans and artists on a global scale. Despite the festival's respectable tenure, there's a certain mystique that continues to surround the event, a feeling derived from the belief that at EDC, anything can happen. Whether you're a newcomer or a vet, the belief that each and every EDC experience is special and unique is an idea espoused by all who enter.

EDM.com was onsite all weekend long, capturing the festival's highlights and most memorable moments. You can relive EDC Las Vegas 2022 in our exclusive photo gallery below.

Photos by Brian Rapaport/BRPHOTO.CO for EDM.com.