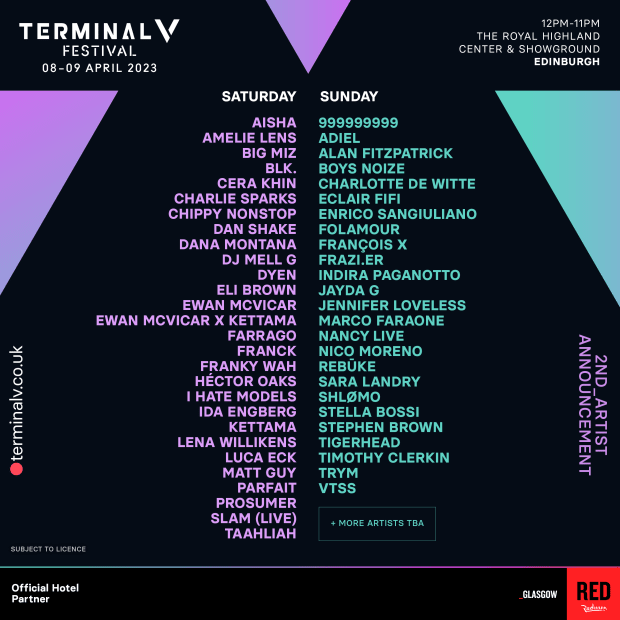 The two-day techno and house music festival in Edinburgh will feature six stages and world-class audiovisual production over Easter weekend.

Take a deep dive into the world of techno and underground house music at Terminal V, a two-day festival in Edinburgh.

What started as a humble, one-room warehouse party in 2017 has evolved into Scotland's largest electronic music event. Thousands of ravers now annually head to Terminal V, which is renowned for top-tier stage design and mind-blowing live production.

The organizers of Terminal V have revealed its 2023 lineup, a massive bill featuring Charlotte de Witte, Amelie Lens, I Hate Models, Folamour, Alan Fitzpatrick, Jayda G, 999999999 and Boys Noize, among others. Check out the full lineup for the festival, which returns April 8-9, below.

Area V, the festival’s biggest stage, is beloved for hosting many of the techno scene's elite artists year in and year out. In the Hangar, technology and music collide for out-of-this-world visuals that plunge you into a rabbit hole. The Terminal stage offers a huge indoor dancefloor for raw, industrial and dark aesthetics that techno lovers crave.

Meanwhile, the Cargo area offers an intimate setting where DJs spin within arm’s reach. This stage was built with 60 stacked cargo steel shipping containers, which are illuminated with dazzling LED lighting. The Blackbox serves up minimalist energy, taking you back to the industrial warehouse raves of the 90s.

Lastly, the Greenhouse is one of two outdoor stages at Terminal V, providing house music and an airy contrast to the festival's indoor stages.