Terminal V is back to Edinburgh and returns bigger and with more music. This year the festival will be spread over two days, multiplying the number of attendees, the number of artists and the levels of fun, all to guarantee you the most exciting Halloween weekend in history.

Terminal V is one of Scotland’s fastest-growing electronic music events and is a heavyweight festival on the techno circuit for showcasing some of the genre’s most powerful players. In five years, the techno festival has grown from 2,000 attendees to around 40,000, excelling in size but most notably in the quality of its lineups. This year, Terminal V returns to The Royal Highland Center as a two-day event. The event will take place on Halloween, on October 30 and 31, hosting some of the world’s most renowned artists.

Terminal V, like many others, was forced to postpone and cancel due to the pandemic. But now, after that painful time, the return is imminent. With the reopening of Scottish nightlife, the hope of normality seems to be well and truly alive, setting the scene for what promises to be the most epic Terminal V ever. The organisers are expecting around 20,000 partygoers each day, spread across the five stages that will host world-class superstar DJs. The previously one-day event is set to be the first supersized event in 19 months in that part of the globe. On this exciting announcement, Terminal V’s Derek Martin said:

‘We’ve spent the most part of the past 18 months working with artists, and management rescheduling the event numerous times, yet further building the festival site, stages and lineup. It has been amazing to see our customers standing by us throughout these unprecedented times, keeping hold of their tickets and allowing us to ensure the event takes place in the months ahead. That has given us even more drive to deliver the very best event we can.’

The lineup is incredibly indescribable, as you can see below, but we’ll try to highlight a few highlights. Fast beat queens Nina Kraviz and Amelie Lens will close out the Area V stage on Saturday and Sunday, respectively. Ben UFO and Helena Hauff will deliver their second-ever face-off, part of a mouthwatering b2b roster that includes other techno heavyweights like Marcel Dettmann and DJ Stingray 313, and Alan Fitzpatrick and Rebüke. 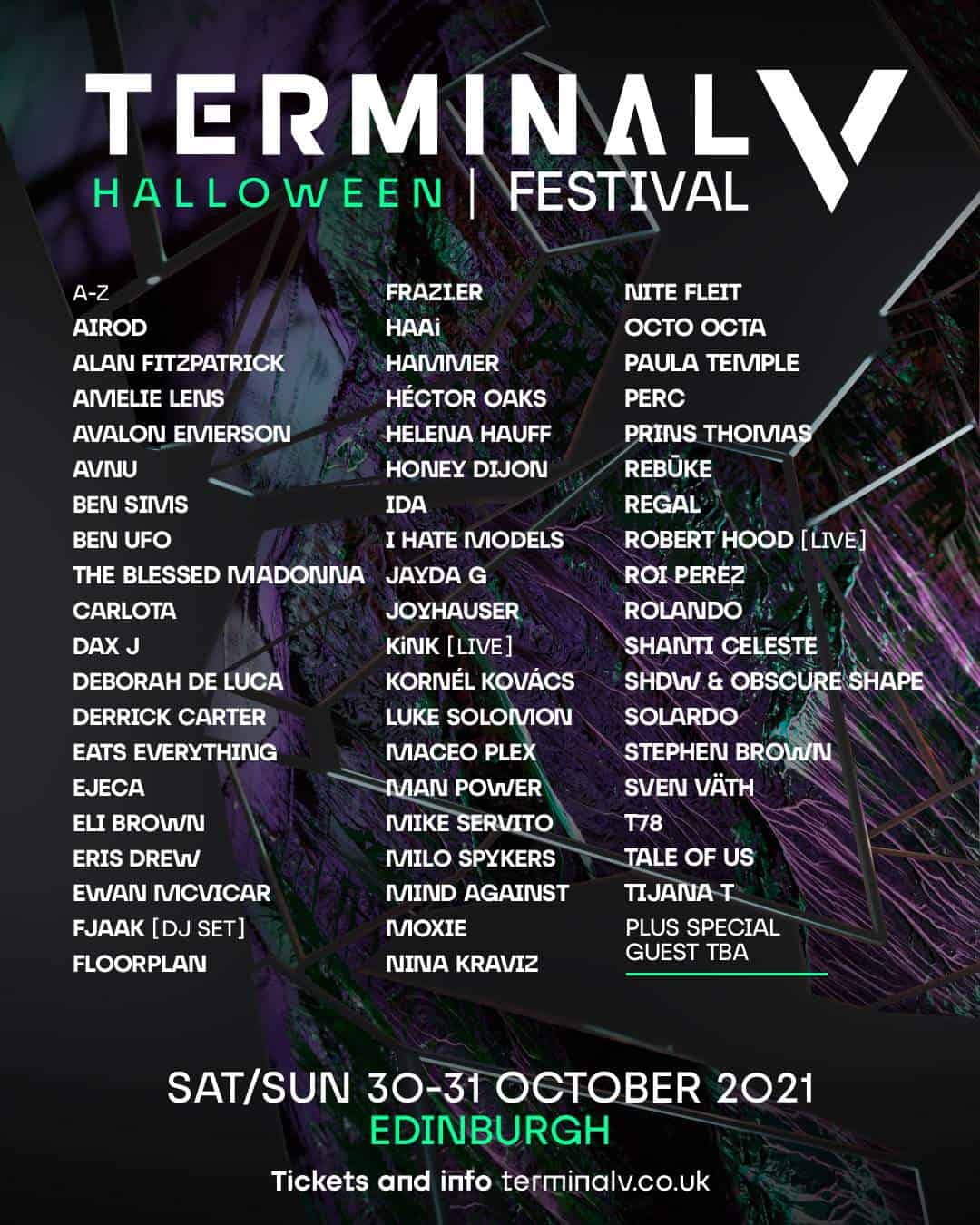 This super special 2021 edition features new stages and includes all the relevant names on the circuit. Scotland has never seen a festival as big as this, so don’t miss the opportunity to witness such a party.

To make the weekend even more unforgettable and honour the date on which it will take place, the organisation has spared no detail to serve up an event that will go down in history. A spooky nocturnal adventure, this is how the grandiose return of Terminal V will be marked. Dancing with you to the sound of the best electronic music in the world is a series of audiovisual graphics. You can expect next-level immersive lightning, piercing lasers and a brain-altering scenario. The raw and industrial flavour of The Royal Highland Center is perfect for hosting this concept, in an event that promises to be a magnificent sensory-stimulating experience. Grab your tickets here.