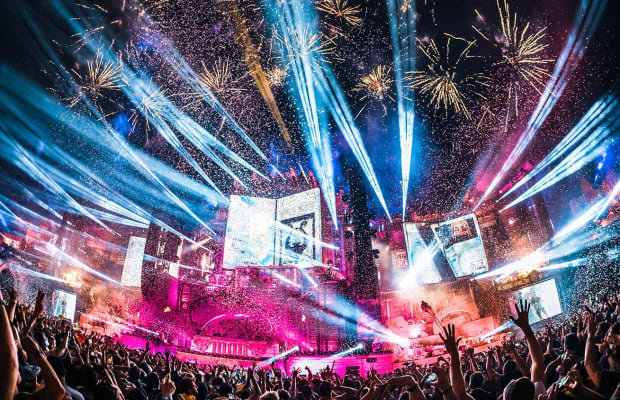 Sadly, summer has come and gone. But there's always next summer.

While you may have been able to squeeze in a music fest or two close to home this year, festivals across Europe felt the wrath of COVID-19, navigating the pitfalls of countless postponements and cancellations. Despite the hardships, major European events are setting their sites on 2022 and it looks like a promising summer for the return of international music festivals.

We've put together the ultimate 30-day electronic music European tour for 2022, plus our firsthand recommendations on how to travel to them on a budget.

Europe has one of the best train systems in the world. It's fast, cheap and comfortable. Traveling from country to country can be stressful and tiring—and you're going to want to have a relaxing ride between festivals—so we suggest you try first-class. Compared to first-class on a plane, which can cost hundreds or even thousands, on Eurail it's a mere $131 more for adults and $99 for youth.

To make this epic 30-day trip, make sure to buy a Eurail Global Pass. The rates for each pass are as follows:

We got to immerse ourselves in the first-class experience, which offered ample leg room, personalized service, world-class small meals, and unlimited drinks (yes, alcoholic ones).

Now that you know how to travel, let's talk about the destinations for your trip: the music festivals.

Awakenings is an electronic music festival anchored in the techno music scene. Located in Spaarnwoude Houtrak just outside of Amsterdam, the festival brings in some of the biggest artists to the Netherlands. In the past, headliners have included Adam Beyer, Amelie Lens, Carl Cox, Charlotte de Witte, and Chris Liebing, among many others.

Awakenings has been organizing techno events for more than 22 years and is known as one of the most popular electronic events in the country. It showcases around 100 acts spread out over eight stages, establishing a techno haven for two days.

Travel: If traveling from North America, fly into London for the cheapest flights. If coming from the U.K., make your way to St. Pancras International, London's international train station. From there you can take a train to Amsterdam Centraal Station.

After two years away, Hideout Festival will return to Croatia's Zrće Beach next summer, promising to be better than ever. The upcoming event will mark its 11th edition and will showcase an incredible electronic dance music lineup across five stages, some of which will be located at Novalja's most popular clubs: Papaya, Kalypso, Aquarius and Noa. In addition to its club nights, Hideout's 2022 itinerary also calls for a number of boat parties on the stunning Adriatic sea.

Travel: From Amsterdam Centraal Station travel by train through Germany, Austria and to Zagreb Glavni Kolod International train station in Zagreb, Croatia. From there, take a short train to the airport to catch an official Hideout Festival shuttle to Zrce, on Pag Island.

Ultra Europe is a major Croatian dance music festival and the flagship European edition of the global festival brand. Returning to the city of Split after two years off, Ultra Europe in July 2022 will be a wild week of festivities at the Mladeži park and a selection of other locations at what is known as Destination Ultra. The festivities include Ultra Beach on the island of Hvar, a Regatta beach party on Brač and a number of events hosted by Resistance inside beach clubs.

While it is too soon to tell who will perform at the 2022 edition, Ultra Europe lineups in the past have featured Swedish House Mafia, David Guetta, Carl Cox, DJ Snake, The Chainsmokers, and many more.

Travel: From Zrce, on Pag Island, the Hideout Festival transfer shuttle will bring you to Split, Croatia, then take an Ultra Europe shuttle from Split to the festival site.

This summer, EXIT Festival made history as the first major international music festival since the onset of the global COVID-19 pandemic. The event took place in full capacity, hosting 180,000 people without social distancing. This year's headliners included David Guetta, Robin Schulz, Tyga, Hot Since 82, and Solomun, among others, as well as many regional names. EXIT Festival promises to curate another year of killer music anchored by the best and brightest in the scene.

Taking place in the historic 17th century Petrovaradin Fortress, the venue is like none other. Situated along the Danube River, the annual event invites festival-goers to one of Serbia's most cherished landmarks.

Travel: From Zrce, on Pag Island, the Hideout Festival transfer shuttle will bring you to Zagreb, Croatia. From there take a short train to Zagreb Glavni Kolod International train station and travel by train across Croatia into Serbia to Novi Sad Train Station a mere nine-minute drive from the Petrovaradin Fortress.

Sea You "Beach Republic" is located at one of the warmest places in Germany. Situated alongside Lake Tunisee, you can expect a stunning festival landscape with special waterfront features such as a water stage, a relaxing island, water sports, even jumbo flamingo rentals on-site—you know the ones, those massive floaties that can fit six adults.

In addition to the beautiful water stage, the festival boasts a selection of six unique stages such as a psychedelic stage, opera stage, teledisko, among others. The event also includes multiple lounges to unwind, a beauty lounge to freshen up at after a day on the lake, and a food village to fuel up before you hit the dancefloor.

Travel: Whether you choose to go to EXIT or Ultra Europe, take a train take to Zagreb, Crotia, from there you can catch one to Freiburg Hauptbahnhof Station in Freiburg im Breisgau, Germany.

Tomorrowland is the world's largest dance music festival, bringing EDM's biggest stars to its magical stages, as well as hundreds of thousands of eager attendees from around the globe. In the past, Tomorrowland lineups have featured the likes of The Chainsmokers, Carl Cox, Amelie Lens, Martin Garrix, Armin van Buuren, Tiësto, and many more major names. It is safe to assume that 2022 will boast another epic lineup that spans all genres.

After forcibly having to take two years off, Tomorrowland plans to return in a big way in 2022. So far there are two weekends confirmed, but the festival's organizers are pushing for approval to host Tomorrowland for a third weekend next year to make up for lost time.

Travel: From Freiburg Hauptbahnhof Station in Freiburg im Breisgau, Germany take a train to Antwerpen-Centraal Station in Antwerp, Belgium, and take a Tomorrowland shuttle to the festival site.