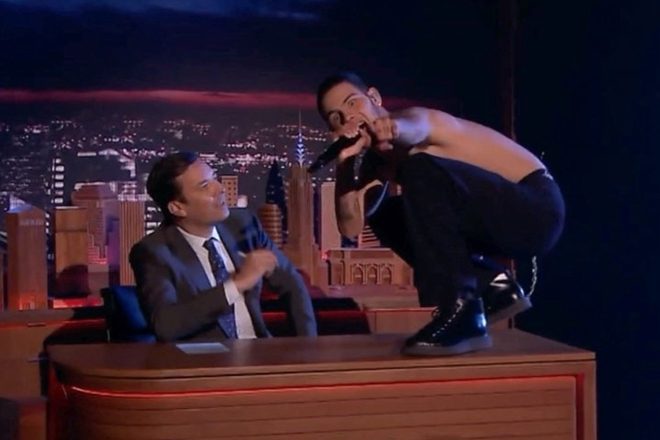 Our current cover star Mura Masa and Slowthai made their US TV debut this week, delivering an incendiary performance of new single ‘Deal Wiv It’.

Read this next: Turning the wheel: Mura Masa is setting off on a whole new direction

Explosive, anarchic and topless, the performance is a testament to the song’s classic punk energy. Swerving off the stage, Slowthai leaps onto Fallon’s desk and looks him in the eye while delivering the bar “every second you waste is a second closer to the pearly gates”

Fallon nervously plays with his pen and paper in response. One YouTube commenter quipped: “If Slowthai had performed [previous Mura Masa collaboration] ‘Doorman’ Jimmy would have had a heart attack”.

Read this next: The dance music inspired by punk

The show comes just before the duo are set to play at the 2020 NME Awards. Holding a respectable four nominations, Slowthai told NME: “I’m coming to win all the awards (including Godlike Genius) and if there’s one I don’t win then I’ll take it from them anyway”.

Watch the explosive performance below.