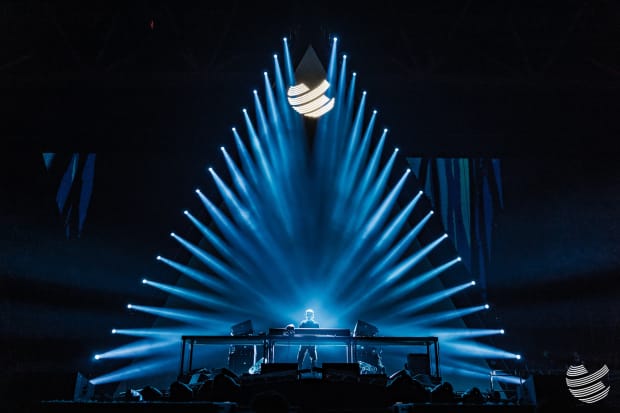 Landing in Düsseldorf to close out a banner year for BigCityBeats, WORLD CLUB DOME reinforced itself in 2022 as the "biggest club in the world."

We were on the ground in Germany for WORLD CLUB DOME: Winter Edition, which returned to the gigantic Merkur Spiel-Arena from December 16-17 with a colossal lineup of 150 artists, who took the decks at the festival's 15 stages.

BigCityBeats, one of Europe’s most successful events brands for almost two decades now, remains laser-focused on innovation. A label, radio show, merchandise distributor and events producer, the company has curated unique dance music experiences throughout and beyond Europe, from Asia to the Caribbean and even into outer space back in 2019.

2022's Winter Edition saw BigCityBeats' founder and CEO Bernd Breiter pull out all the stops to curate a memorable raving experience—and it’s safe to say he delivered in spades.

"We give the best acts of each genre a playroom where they can perform in, so if maybe a hip-hop superstar is performing at the arena and someone wants to listen to techno, they can go to the club circle," Breiter told EDM.com. "The magic thing is that you can walk from club to club and jump into completely different dance music styles, while always having the ability to open the doors and visit the biggest dancefloor in the world."

Spanning two nights, Winter Edition combined a massive mainstage with over a dozen smaller club stages, conveniently set up all around the stadium’s corridors. The shrewd setup was amplified by dazzling lasers, captivating visuals, explosive pyrotechnics and much more.

One of the festival's most electrifying performances came from the red-hot James Hype.

"WORLD CLUB DOME is super exciting. It was the first festival I ever came to in Germany, and the energy from the German crowd is so good," Hype told us before taking the stage. "The last WORLD CLUB DOME I went to was a wild experience. They had supercars and helicopters and loads of other cool stuff. I’m very excited to perform tonight."

The smaller club stages positioned around the mainstage, on the other hand, made for a truly personal feel. Alle Farben, Andhim, Maddix, LNY TNZ, Hugel, and many more threw down, while Spinnin’, Acid Wars and Bass Division hosted their own stages, among others.

With an attendance of almost 40,000, Winter Edition 2023 was a huge success. During the event’s closing ceremony, Breiter was joined onstage by ESA astronaut Dr. Matthias Maurer and Dr. Antje Boetius, director of the Alfred Wegener Institute, to give fans a preview of what BigCityBeats has in store for 2023.

"Connecting science and entertainment is fundamental in reaching young people," Breiter said about his vision for Atlantis. "We live in a delicate world and need to make scientific topics and content accessible to everyone to secure the future of our planet."