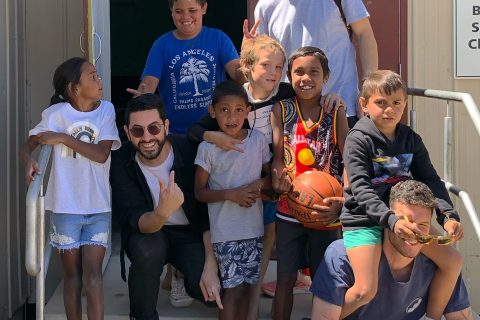 Heaps Decent is an Australian organisation that reaches out and connects with people from all walks of life and uses music programs and workshops to help create positive change.

It was founded in 2007 by Sydney DJs Nina Agzarian and Andrew Levins who teamed up with American DJ and producer Wesley Pentz, better known globally as Diplo.

Since then they’ve linked up with countless artists including Lykke Li, A-Trak, DJ Medhi, Brodinski, Busy P, Tiga, DJ Craze, Jesse Rose, Gina Turner and more to bring a create a once in a lifetime opportunity for everyone involved.

In an effort to better understand the on-going nature of Heaps Decent and coincidentally a time where light has been shone on vulnerable people in communities across Australia we spoke with lead teacher Adam Bozetto who has been with the organisation for over 10 years.

SR: What is Heaps Decent?

AB: So I have just copied and pasted this from our website but I really think it said better than any way I could!

Heaps Decent is an Australian organisation empowering diverse young people to express their creativity through music and multi-media. We support engagement for change, positive futures & the development of high-quality content with a unique identity.

Twelve years on, Heaps Decent has helped create well over 1000 songs with talented young Australians from radically diverse backgrounds: from First Nations girls on the Marrickville streets to young men who have dropped out of school; from 4-year-olds in Wilcannia to 22-year-olds in Redfern; from Bunbury in WA to Santa Teresa in the NT. Young people have been empowered to tell their stories in music through workshops, performances and mentoring schemes.

SR: Who are some of the teachers/mentors?

AB: There have been some many amazing people over the years. It started with Andrew Levins and Nina Las Vegas and I guess you could also say Diplo (He was part of the first workshop) Since then it might be easier to list – Joyride, Shantan, KLP, Bad Ezzy, Stuart Tuner (Set Mo) Caleb (Go Freek).

SR: What are some of the goals of Heaps Decent? Both short and long term?

AB: I think the main goal often to keep our head above water and find people to fly the flag any of the staff moves on. Charlie and I have been at Heaps Decent for over 10 years now and as much as I never plan on leaving we also can’t do it forever.

Often funding will be for a 1 or 2-year project and that’s it. It is a constant grind to keep finding funding to keep going. I feel like of the amazing Nerida (CEO) is always looking and finding different projects we can be part of year to year.

SR: What are some of the challenges?

AB: There are many. I think maybe its best to answer this from my own perspective. One of my biggest challenges was trying to understand the differences between how I was and what I thought compared to the people we work with. I used to get very frustrated in the early days when I could see the opportunity for an individual but not see it being taken. I would think ‘Man if I had that chance I would be all over it’. But thats just it isn’t it. I have chances more than a lot of people I work with and even working much closer to different communities that most other people like me, I couldn’t even understand and see that it’s just not that simple. I was always like ‘what you mean you haven’t got $3 for the train’. Who even knows if that was the real reason that someone couldn’t make a session. I would be ‘Go to the ATM and I will send you cordless cash’ but there was a very good chance that it wasn’t the reason why they couldn’t make it.

SR: Why did you personally get involved?

AB: Honestly because Andrew Levins probably asked me at 2am in the morning at World Bar if I was keen to go make music in a Juveniles Justice centre. I just thought ‘Cool why wouldn’t I’.

The first year I was a volunteer and it was mainly just a fun thing to do. We started getting paid at some point which was important because it was hard to be consistent. We might have a workshop booked in but we would get offered a paying job or gig at the same time so we always had to take the latter first. So then Heaps Decent kinda became my second job and it still is. As much as I would always be supporting the cause I wasn’t the one to start the movement but I think that’s why working at Heaps Decent is a great place for me to be. I can just focus on making the best possible music with people we work, full stop.

I am lucky that there are a lot of other people who are doing the fighting on the frontlines.

SR: Digging a bit deeper, what are some of the underlying challenges at play with the students?

AB: I think they are all the ones that we already know of. But what I have learnt is that the extent it affects students is so much larger than what I thought. It has taken me years of working with maybe over 1000 students start to see this. Before I started at Heaps Decent I had barely left the inner city. Only talked to the same people. We all know about the echo chamber. I have been working with the same kids (adults now) for 7 – 8 years. I still hear new stories about their lives today.

People don’t often open up right from the get-go, but maybe after 3 years of writing music with them, they start including information that just blows your mind. I have writing songs about the personal stories physical and drug abuse, homelessness and suicide. When a 14-year-old writes a song about how her father abused her and her mother you start to realise how tough some peoples lives are.

SR: What effect does the music have?

AB: Common ground, respect, achievement and enjoyment. No matter who I am if my beat sucks it sucks, and if it slaps it slaps. I can walk into the room and all the students might think I am lame but if I can make a good beat everything changes. It also gives people who never cross paths something to enjoy and make together. You get to know people you wouldn’t normally get to know and you become friends. Some people just aren’t good at maths but they are great at music.

Finally, they can get praised for doing well because they have done well. Its fun, everyone wants to have fun

SR: What bigger challenges exist in society for kids coming out of detention?

AB: This is maybe a tough one for me to answer as I only know what I hear from staff in the centres. All the same reasons that get them in there. NO support, money, family and prospect for the future.

The one thing I do hear about which I never would have expected when I started at Heaps Decent is that life on the inside can be better for some detainees. They have a roof over their heads, they get feed every day and it gets them off drugs. They want to come back in sometimes.

SR: How can the music industry help?

AB: Listen. Don’t drown out their voices with your own. I have learnt a lot from writing lyrics while working with heaps decent. Ask people questions about their music, their life, what they think. A lot of the people I work with never get asked what they think about things. I think it makes them feel better just to have a voice that’s their voice.

Want to learn more about Heaps Decent? Support how you can? Be sure to visit the Heaps Decent site and follow them on Facebook.